Bonn, 2 March 2018 – On the 3rd of March each year is World Wildlife Day, this year being conducted with the theme “Big Cats – Predators under Threat”, highlighting the dramatic declines in numbers and habitat being suffered by Lions, Tigers, Leopards and Jaguars as well as Cheetahs, Snow Leopards and Pumas.  The campaign also provides an opportunity of publicizing and garnering support for the many conservation initiatives being undertaken worldwide to ensure big cats’ survival.

CMS Executive Secretary, Bradnee Chambers is attending celebrations organized in Bern by the Swiss Federal Office for the Environment.  Details about the activities organized as part of this event can be found on the dedicated website set up by Federal Office.

Mr Chambers also served on the jury judging entries in the International Big Cats Film Festival, which is being organized jointly by the Jackson Hole Wildlife Film Festival and the secretariat of the Convention on International Trade in Endangered Species (CITES).  The winning film will be screened at a special event held at the Explorers Club in New York City on 3 March.

“We were presented with an amazing field of candidate films to judge – I enjoyed them all immensely.  As well as the feeling that I was getting right up close to real big cats, I was also deeply impressed by the people portrayed who dedicate their lives to protecting these magnificent animals.  I am grateful to all the film-makers for making so cogently the conservation case.”

Four species of cat (Felidae) are listed on the CMS Appendices.  Appendix I – for endangered species that Range States must take certain measures to protect – includes the Snow Leopard and all Cheetah populations except for those in Botswana, Namibia and Zimbabwe.  Added to Appendix II at last year’s Conference of the Parties in Manila were the Lion and the Leopard. 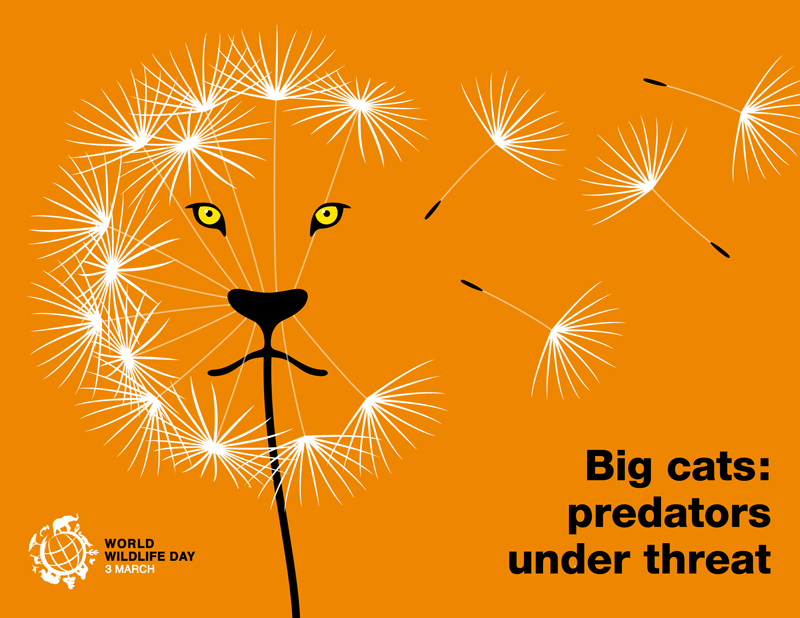 The Asiatic Cheetah and the Snow Leopard are both covered by the Central Asian Mammals Initiative, adopted along with its associated work programme by CMS Parties at COP11 in 2014 through Resolution 11.24.

Efforts on behalf of the Snow Leopard are being led by the Government of Kyrgyzstan, which hosted a summit in August last year, attended by all twelve Range States resulting in the “Bishkek Declaration”.

In May 2016, Uganda hosted a joint meeting of CMS and CITES attended by African Lion Range States. The meeting brought together representatives of 28 governments and led to an historic agreement on how best to secure the species’ survival.  A key output of that meeting was the Entebbe Communiqué.

The origins of UN World Wildlife Day can be traced back to the 68th session of the United Nations General Assembly (UNGA) in 2013 which proclaimed 3 March as the global day upon which to celebrate and raise awareness of the world’s wild animals and plants. The reason this date was chosen is that it marks the day when CITES was signed in 1973.  The CITES Secretariat was designated as the facilitator for the global observance of this special day for wildlife.