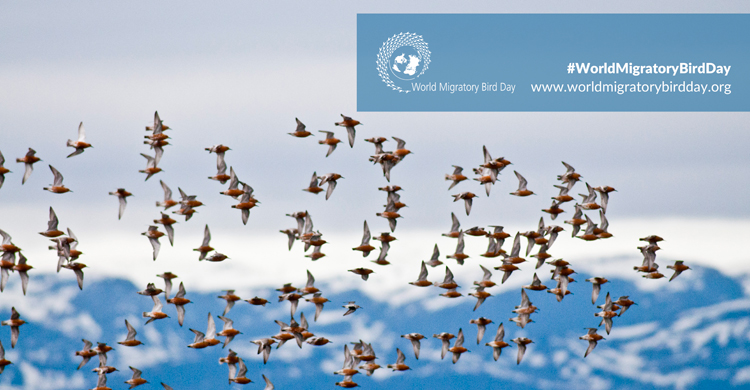 Bonn, 10 May 2017 - Migratory birds face an increasing number of threats while traveling huge distances. Their intercontinental flyways include key stopover sites that are essential for migratory birds to rest and refuel before continuing their journey. Celebrated in over 70 countries on or around 10 May, World Migratory Bird Day 2017 highlights the need for international cooperation to conserve migratory birds and their habitats for the benefit of mankind. The theme this year is “Their Future is Our Future – A Healthy Planet for Migratory Birds and People” which is closely linked to the UN Sustainable Development Goals.

Millions of birds migrate every year along global flyways between continents, for example from breeding grounds in Europe to warmer feeding grounds in sub-Saharan Africa. Some of the birds are facing the steepest declines ever experienced. Habitat loss, caused by land-reclamation and changes in global agricultural practices as well as poaching are threatening migratory birds across the world. Populations of the critically endangered European Turtle Dove have declined by almost 90 per cent since the 1970s and more than 90 per cent outside the EU between 1980 and 2014.

Habitat loss at stopover sites along the shores of the American Atlantic Coast have prompted a sharp 80 per cent population decline in the North American breeding populations of the Red Knot since 2000.

Bradnee Chambers, Executive Secretary of the Convention on Migratory Species (CMS) said: “The planet is changing rapidly with shrinking bird habitats along all the global flyways. We need to take care of the ecosystems, which support all life on Earth. If we commit ourselves to sustainable development and preserve the habitats that we share with migratory birds, both wildlife and people will benefit, because their future is our future.”

Globally threatened species such as the Great Knot use the Yellow Sea as a key stopover site during their migrations. Land reclamation and habitat loss threaten the intertidal wetlands on the Yellow Sea and the migration of 50 million waterbirds. These habitats are crucial for migratory birds, and countries are increasingly applying to have critical sites included on UNESCO’s World Heritage list. China, which has proposed a series of 14 sites on the Yellow Sea, is a recent example.

Sound land use policies are required to achieve the UN Sustainable Development Goals and landbirds are excellent indicators of land use change. Protecting landbirds and their habitats will help conserve other species of flora and fauna without hampering economic growth.

Jacques Trouvilliez, Executive Secretary of the African-Eurasian Migratory Waterbird Agreement (AEWA) said: “Migratory waterbirds such as the Garganey Duck that are hunted for subsistence in the African Sahel play a significant role in ensuring food security for people in the region. Engaging local communities to practise sustainable hunting and in conserving waterbirds and their threatened wetland habitats is a core aspect of AEWA activities in Africa.”

Health is another objective of human development. Vultures, invaluable species that act as sanitary police are declining at an alarming rate. Poisoning as well as trade for traditional medicine account for 90 per cent of vulture deaths in Africa. Today 75 per cent of Old World vultures are heading towards extinction.

CMS has spearheaded the development of an Action Plan for 15 vulture species in Africa, Europe and Asia across more than 120 countries. The plan, coordinated by the Raptors MOU, will be submitted for adoption at the upcoming CMS Conference of the Parties (COP12) due to take place in October in Manila this year. In Manila, countries will also decide on sustainable agricultural practices and on ways to reduce hunting pressure on migratory birds. Environmentally sound land use policies that deliver for biodiversity and people will also be on the agenda. Preserving migratory birds and the habitats they depend on contributes to a sustainable future for all life on Earth.

Initiated in 2006, World Migratory Bird Day is celebrated each year to highlight the need for the conservation of migratory birds and their habitats. More than 180 events to mark World Migratory Bird Day 2017 (registered on the website) will include bird festivals, education programmes, media events, bird watching trips, presentations, film screenings and a benefit concert to raise funds for international nature conservation.

The Convention on the Conservation of Migratory Species of Wild Animals (also known as CMS or Bonn Convention after the city in which it was signed) aims to conserve terrestrial, aquatic and avian migratory species throughout their range. It is an intergovernmental treaty, concluded under the aegis of the United Nations Environment Programme, concerned with the conservation of wildlife and habitats on a global scale. Since the Convention's entry into force in 1979, its membership has grown steadily to include 124 Parties from Africa, Central and South America, Asia, Europe and Oceania.

CMS and its related Agreements on migratory birds bring together governments and other stakeholders to coordinate and further develop conservation policies, to ensure that all flyways in the world benefit from coordination mechanisms that promote cooperation at ground level among the countries involved. The Raptors MOU was concluded under CMS as a special instrument to address threats to these species.

The Agreement on the Conservation of African-Eurasian Migratory Waterbirds (AEWA) is an intergovernmental treaty dedicated to the conservation of migratory waterbirds that migrate along the African-Eurasian Flyway. The Agreement covers 254 species of birds ecologically dependent on wetlands for at least part of their annual cycle. The treaty covers 119 Range States from Europe, parts of Asia and Canada, the Middle East and Africa. Currently 75 countries and the European Union (EU) have become a Contracting Party to AEWA (as of 1 April 2017).