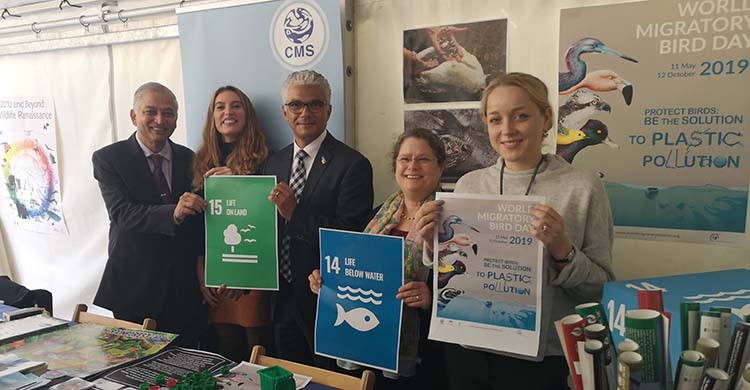 Bonn, 14 October 2019 – The Convention on Migratory Species (CMS) and its associated Agreements also called the CMS Family took part in the annual UN Day celebrations on Bonn's Market Square on 12 October.  Acting Executive Secretary joined the CMS Family team, meeting with Mayor and other city officials, heads other UN agencies, members of the diplomatic corps, and representatives of other organizations participating in the event.
Twenty-one organizations including CMS, the African-Eurasian Waterbird Agreement (AEWA), the Agreement on the Conservation of Small Cetaceans of the Baltic, North East Atlantic, Irish and North Seas (ASCOBANS) and the Agreement on the Conservation of Populations of European Bats (EUROBATS) followed the invitation of the municipality to showcase their activities.
This year's UN Day in Bonn also coincided with the second peak-day of the World Migratory Bird Day (WMBD) celebrations. CMS and AEWA launched this annual campaign to raise awareness of threats to migratory birds across the globe. Together with their U.S. partner Environment for the Americas (EFTA), they agreed to use the campaign to focus attention on the topic of plastic pollution and its negative effects on migratory birds, particularly seabirds under the theme: “Protect Birds: Be the Solution to Plastic Pollution”.
Plastic pollution poses serious health risks to both humans and wildlife globally, affecting a wide range of migratory species including whales, turtles, fish, and birds.
Plastic pollution presents a three-fold threat to birds:
At the opening of the UN Day celebrations in Bonn, Lord Mayor Ashok Sridharan highlighted World Migratory Bird Day. Together with the current chair of the UN Agencies, Shyamal Majumdar, he invited the public to visit the information stand of CMS and AEWA to learn more about the threat of plastic pollution to migratory birds, and what everyone can do to address it.
During his tour of the main UN tent on the Bonn market square, the Lord Mayor joined CMS Acting Executive Secretary Amy Fraenkel at the CMS Family information stand. With the help of photos documenting the impact of plastic on Albatrosses, Ms. Fraenkel explained how birds are affected by plastic debris discarded in the environment.