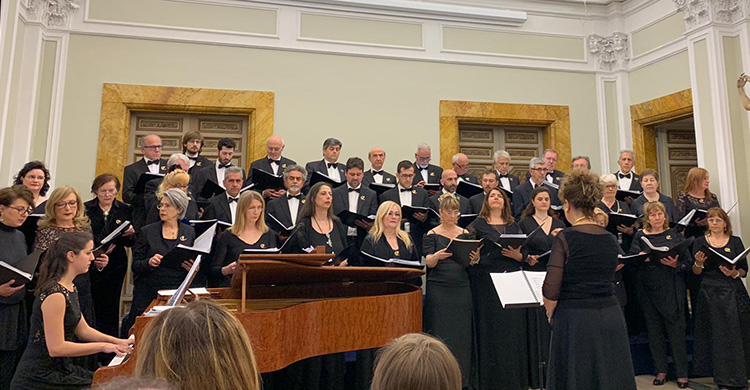 Bonn, Germany, 13 May 2019 – for the seventh consecutive year, the Corale Lirica San Rocco operatic choir performed in a benefit concert in support of the cause of bird conservation on the occasion of World Migratory Bird Day.  After venues in Bonn for the first four years, and the choir’s home city Bologna in 2017 and 2018, the concert was held in the Palazzo Rospigliosi on Rome’s Quirinal Hill.

The theme for this year’s concert was the Moon, the Sun and other Stars (la Luna, il Sole e l’altre Stelle) and featured arias from several operas by noted Italian composers, including Donizetti, Rossini, Puccini, Bellini, Leoncavallo, Ponchielli and Verdi.  The theme was chosen in part to reflect the importance of celestial bodies in guiding birds on their migration.

Our good friend and colleague, Bradnee Chambers, who sadly passed away earlier this year, will be sorely missed.  He was a great supporter of the annual benefit concert and we were delighted to welcome him to Bologna two years ago.  And it seemed fitting to dedicate the opening aria in this year’s concert to his memory.

Øystein Størkersen, who is both the Chair of the CMS Standing Committee and a member of the Bern Convention Bureau, and Maria Carmela Giarratano, the Director General of the Italian Ministry of the Environment, gave introductory addresses, stressing the importance of birds as an element of biodiversity and the severity of many of the threats they face, including plastic pollution, which was the special focus of this year’s World Migratory Bird Day.  Both Mr Størkersen and Ms Giarratano had attended the joint CMS/Bern Convention meeting on the illegal killing of birds, which had taken place in Rome earlier in the week.

The money raised at the concert will be donated to projects related to bird conservation.