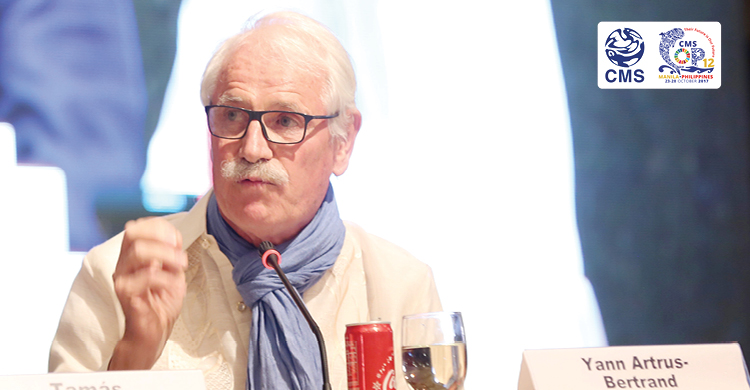 Manila, 23 October 2017 – on the opening day of the CMS COP, Yann Arthus-Bertrand, UN Environment Goodwill Ambassador, was the keynote speaker at the ceremony opening formal proceedings.

The celebrated film maker, journalist and environmental activist and founder of the GoodPlanet Foundation, pointed out that over his lifetime while the human population has increased threefold, wildlife numbers have fallen dramatically.  Poaching which claims the life of an elephant every 20 minutes and habitat loss, degradation and fragmentation, driven in many cases by human activities are among the principal causes for the decline.  The African Lion, a species which Yann studied at close hand while he lived in Kenya, is extinct in parts of its historic range and its population has been reduced to an estimated 20,000 to 30,000.

Some of Yann’s spectacular wildlife photographs feature in a specially produced book focusing on the species proposed for inclusion on the CMS Appendices. The book is entitled Terra, the same name as a moving documentary film capturing the essence of humanity and living nature’s interdependence, a special showing of which has been arranged for COP12 delegates.