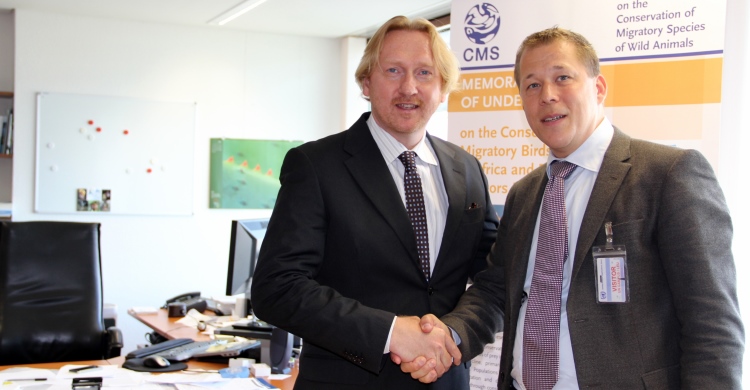 Mr. Peter Örn, Desk Officer at the Swedish Environmental Protection Agency, signs the Memorandum of Understanding on the Conservation of Migratory Birds of Prey in Africa and Eurasia on behalf of the Swedish Minister of Environment, Lena Ek.

Bonn, 4 July 2013– Sweden has signed the Memorandum of Understanding on the Conservation of Migratory Birds of Prey in Africa and Eurasia (Raptors MOU), which was concluded in 2008 under the auspices of the Convention on the Conservation of Migratory Species of Wild Animals (CMS). Peter Örn, Desk Officer at the Swedish Environmental Protection Agency signed the Raptors MOU on behalf of the Swedish Minister of Environment Lena Ek, today at the UN Premises in Bonn, Germany.

CMS Executive Secretary Dr. Bradnee Chambers said: “With Sweden’s signature of the Raptors MOU, the country will become a key player in protecting threatened migratory raptors across the African–Eurasian region.”

Despite high levels of legal protection for birds of prey in many countries, particularly in Europe, major challenges remain to halt and reverse the populations’ declines of this spectacular group of birds. Human-made threats affect migratory raptors with urbanization, intensification of agricultural practices and pollution destroying or degrading their habitats. In addition, they face direct threats through shooting, trapping and poisoning.

Swedish long-distance migrants should benefit from the step taken by the Swedish government. Efforts will increase to protect Osprey (Pandon haliaetus), European Honey Buzzard (Pernis apivorus), Montagu's Harrier (Circus pygargus), Eurasian Hobby (Falco subbuteo), Hen Harrier (Circus cyaneus) and Western Marsh Harrier (Circus aeruginosus) across their entire geographical range. Two species of special concern for Sweden are the Osprey, for which Sweden has the largest breeding population in Europe, and European Honey Buzzard (Pernis apivorus). Both species are in decline and threatened by poaching along their migration routes as well as in their wintering areas.

Sweden is an important breeding area for migratory birds. More than 240 species have been recorded in the country, including 30 different species of birds of prey that are covered by the CMS Raptors MOU.