Spotlight on the Critically Endangered Atlantic Humpback Dolphins in Africa 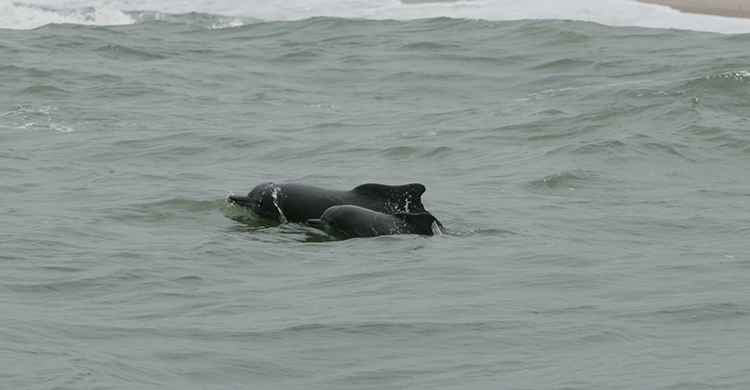 Bonn, 1 February 2021 – A collaborative effort between scientists and conservation organisations around the world, including CMS, has resulted in the launch of a new trilingual website that highlights the plight of Atlantic humpback dolphins and provides resources to support a broad range of stakeholders in an effort to protect the species. Atlantic humpback dolphins (Sousa teuszii) are considered Critically Endangered on the IUCN Red List of Threatened Species and are in danger of sliding toward extinction without urgent conservation intervention. They have been listed on CMS Appendix II since 1991, and additionally on Appendix I since 2009. In 2017, Parties to CMS endorsed a Concerted Action for the Species, which was renewed at COP13 in 2020.

With fewer than 3000 individuals estimated to remain throughout the species entire range along the Atlantic coast of Africa, conservation efforts of all stakeholders need to come together in order to prevent further declines and allow the species to recover. As an excellent complement to CMS’ efforts, the Conservation of the Atlantic Humpback Dolphin (CCAHD) was founded, currently comprised of more than 50 individuals and over 40 organisations with the collective aim to ‘Work towards the long-term sustainability of Atlantic humpback dolphin (Sousa teuszii) populations and their habitats through research, awareness, capacity-building and action.’

A key tool for achieving this aim is the newly launched website https://sousateuszii.org/, which displays content in English, French and Portuguese, the three languages most commonly spoken among the 19 countries that encompass the species’ range from Western Sahara in the north to Angola in the south.  The site provides information about the species’ distribution, biology, ecology and threats, while an interactive map allows users to explore what is known about the dolphins and who is studying them in each of the 19 range countries. A ‘Resources’ section features a searchable table of scientific literature, as well as downloadable resources, such as species identification cards, printable A4 Factsheets, colouring sheets for school children, and reports and research protocols for data collectors.  The Website is a dynamic resource, that can be updated and enriched with news items and additional content and information over time.

Please see below the official press release of the CCAHD in English, French and Portuguese.