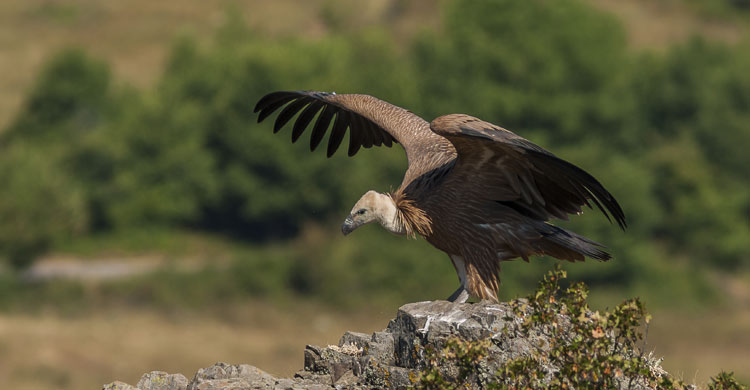 Lightning never strikes the same place twice, or history always repeats itself? Unfortunately in the case of vultures, nature's "clean-up" crew, the latter applies -- with African populations of these useful birds facing catastrophic declines -- just as their South Asian counterparts did in the 1990s. Patricia Zurita and Bradnee Chambers explain the importance of protecting vultures, whose vital ecological role has a direct bearing on human health.

Many animals scavenge for part of their diet, but of tens of thousands of vertebrate species, only 23 have so completely developed this particular specialization -- the vultures. And they have honed the skills being able to resist and detoxify bacterial poisons in rotting flesh that would kill other organisms. The acidic secretions of vultures' stomachs can dispose of all but the most resistant spores.

Vultures therefore provide people with important services as nature's "waste-disposal units," keeping habitats both natural and man-made free of rotting carcasses, and disease, whereas other scavengers often transmit toxins rather than neutralising them.

Twenty years ago there were estimated to be over forty million vultures in India. Now they have been reduced to less than 1 percent of that. The species that was once the most common has declined by a staggering 99.9 percent, at rate faster than any other wild bird, including the ill-fated dodo.

The main cause of the vultures' collapse in South Asia is diclofenac, an anti-inflammatory drug used on cattle, which is toxic to any vulture feeding on the carcass of a recently treated animal. After the discovery of the impact it had on vultures, diclofenac was banned for veterinary use across South Asia. An alternative, meloxicam, has been tested and found to be safe for vultures.

Here, we have learned the hard way what happens where vultures disappear. One of the worst consequences has been the explosion in the population of feral dogs that filled the void left by the birds, resulting in a corresponding increase in human deaths from rabies. Meanwhile the 'sky burials' of the Parsee and many high mountain communities, in which vultures dispose cleanly of human bodies, are no longer possible.

At the time, the authorities could not reasonably have been expected to predict the problem. Now, no such excuse exists but incredibly, since 2013, veterinary diclofenac has been legally sold in Europe. This raises the possibility that the Asian story could be repeated with dire results for Europe's vultures.

Vulture-filled skies are almost as much a symbol of the African savannah as large mammals, but even without diclofenac, the birds are not safe here either. The first signs that something was wrong came from comparison of roadside counts going back to the 1970s. Then came the reports of mass poisonings, body parts for sale in markets and uneaten wildebeest carcasses rotting as never before in Kenya's Masai Mara National Park. Four vulture species are now on the edge of global extinction, and the rest have all become rare.

Predatory mammals (also much reduced in number) such as lions, hyenas and jackals, find themselves in escalating conflict with people as the human population of the continent increases, while remaining wild places and wild prey populations shrink. Consequently, farmers -- with access to cheap agricultural pesticides -- increasingly turn to using poisoned carcasses to remove these potential predators to protect their livestock and livelihoods, but inadvertently lure vultures to their deaths.

Vultures in Africa are also poisoned deliberately. As if poachers did not already inflict enough damage on elephants, rhinos and other large animals, they also target vultures because the birds circling a kill are often how wardens first become aware of a poaching incident. On occasions hundreds of vultures have been found dead within metres of a poison-laced carcass.

The use of animal body parts in 'traditional medicine' is well known in Africa, and supports a thriving trade. Vulture parts are said to cure illnesses and ailments, increase intelligence and protect against witchcraft. They may be thought to bring good luck and clairvoyant powers: the head or brain of the vulture, eaten or smoked within a cigarette, is highly prized as an aid to gambling.

The vultures can be saved. Legislative measures combined with work on the ground to make habitats free of diclofenac are showing signs of curbing the declines in Asia. Europe's vulture populations have increased and some are doing well, although the licencing of veterinary diclofenac could jeopardise this success; quite simply it must be banned.

In Africa, the challenge is immense, but vulture conservationists recognize the need to work together and form alliances, for example with those working on elephants and big cats and the health sector. Both BirdLife International and the Convention on Migratory Species (CMS), through its working group on poisoning and its instrument dedicated to conserving birds of prey in the African-Eurasian region, are raising awareness of the plight of these magnificent birds and their importance to people, while resolving human-animal conflicts, without resorting to poisoning.

As the heads of CMS and BirdLife International we commit our organizations to ensuring that the plight of these essential creatures is made known to a global audience.

Patricia Zurita is Chief Executive of BirdLife International. Bradnee Chambers is Executive Secretary of the Convention on the Conservation of Migratory Species of Wild Animals.

Ban of vulture-killing drug in India is working
Opinion: The Fates of Vultures and Elephants Go Hand in Hand
Action to Save Vultures Will Protect Human Health, Say Experts