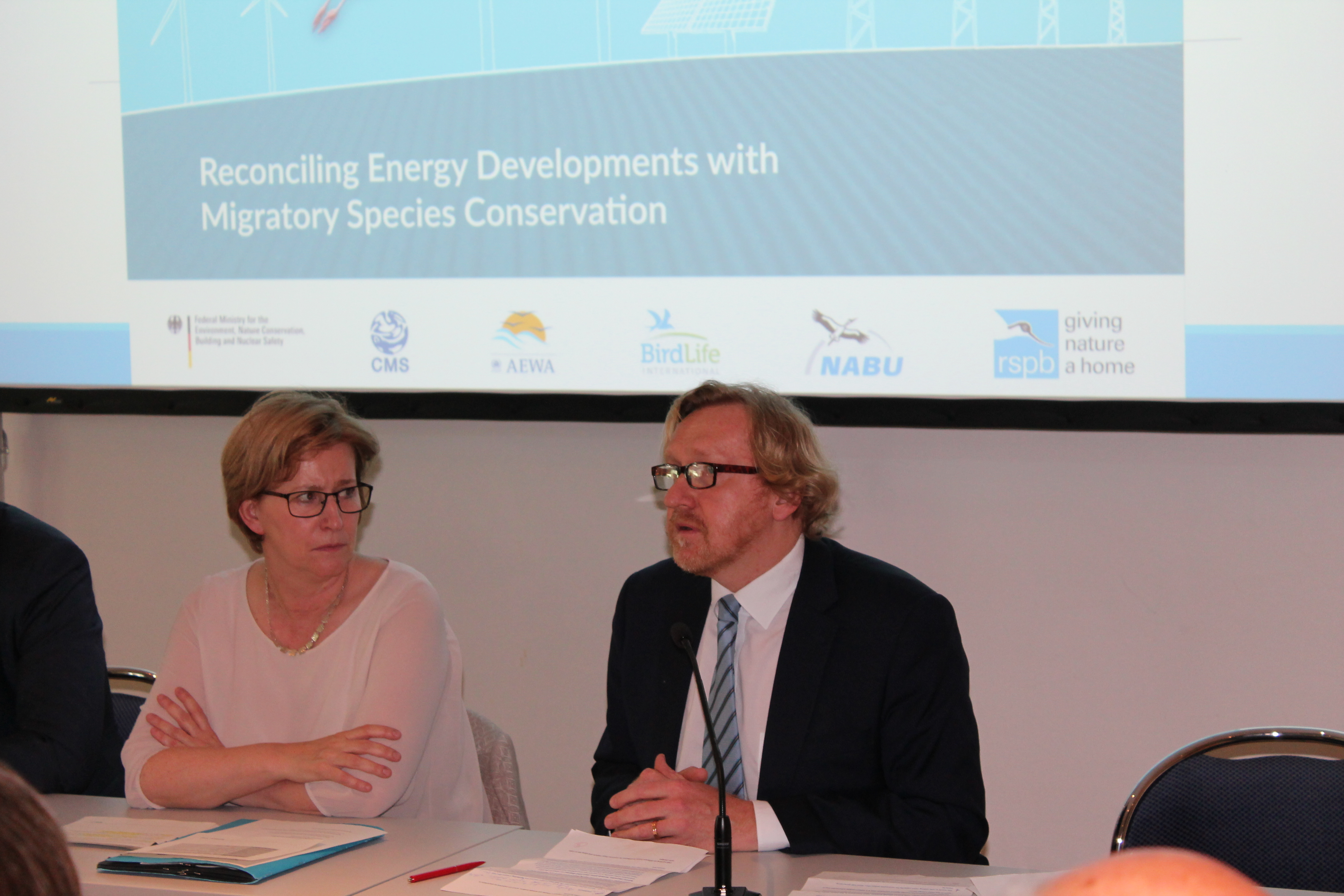 Excerpts from the keynote address of Dr. Bradnee Chambers at the side event on 17 May in the margins of the UN Climate Change Conference in Bonn.

BONN (IDN-INPS) – The 2030 Agenda for Sustainable Development and the Paris Agreement on Climate Change are ground-breaking and highly synergistic agreements. Together they provide a vision and an agenda for shared prosperity and peace on a healthy planet.

To realize the vision, climate change needs to be addressed as a matter of urgency. It is already having impacts on nearly all aspects of human societies and the natural environment.

Energy lies at the heart of these two agendas. The 2030 Agenda has established the first ever universal goal on energy, SDG7: to “Ensure access to affordable, reliable, sustainable and modern energy for all.” SDG7 includes the target: “By 2030, increase substantially the share of renewable energy in the global energy mix.”

Making the transition to sustainable energy systems that meet every one’s needs and that do so cleanly, reliably and affordably is essential for sustainable development and the real solution to climate change. This transition is fortunately already happening and we are on track to double the share of renewables contribute to energy production.

Smart governments are shifting public policy to embrace renewable energy as part of their energy mix and to drive energy efficiency.

In the power sector in the United States, solar energy already employs more people than oil, gas, and coal combined. China aims to increase its renewable energy usage by about 40 per cent by 2020. India’s solar capacity is expected to double by next year. Saudi Arabia plans to install capacity for 700 megawatts of solar and wind power.

According to Bloomberg New Energy Finance, $270 billion was invested globally in renewable energy in 2014.

The Convention on the Conservation of Migratory Species of Wild Animals has been considering the effects of climate change on migratory species for nearly 20 years.

Impacts of climate change on migratory species are already evident; and they are severe and they are expected to worsen in the years to come.

Recent studies revealed that the red knot and sanderling had been shrinking in size because of nutritional mistiming at their breeding grounds. Their bills in particular were becoming smaller. This meant in turn that they were not able to reach their normal food at their wintering grounds in Banc d’Arguin in Mauritania, and they were eating seagrass roots instead of bivalves. The changes had been noticed over a very short period of just 20 years.

Many reptiles are reliant on temperature sex determination, as are some birds and fish. Temperatures of 29.2°C at the breeding beaches produce a 50:50 sex ratio in sea turtle populations, including the green turtle, hawksbill turtle, leatherback turtle, loggerhead turtle and the olive ridley turtle. Higher temperatures will lead to the feminization of populations, which will affect breeding success.

Polar marine mammals are expected to suffer due to a decline in protective and breeding habitats. The bowhead whale and the narwhal (or narwhale) require the Arctic sea ice to provide them with shelter, whilst other species such as the polar bear and the ringed seal rely upon this habitat to breed and feed.

Baleen whales, a number of fish (e.g. basking shark) and bird species (e.g. Humboldt penguin, Balearic shearwater, Bermuda petrel, short-tailed albatross) are reliant on abundant zooplankton either directly, or to nourish their prey: krill, fish and cephalopods. These species will be negatively affected by changes in marine ecosystems and food-webs as increasing sea temperatures cause zooplankton abundance to decline.

Extreme temperatures have been known to cause mortality in the West African manatee as sections of river can become isolated from the main flow, leaving pools or channels vulnerable to intense heating.

Of species listed on CMS Appendix I, sea turtle populations are likely to suffer the most from sea level rise. The IPCC (Intergovernmental Panel on Climate Change) predicted that a sea level rise of 0.5m (well below even the most optimistic projections) will eliminate 32 per cent of sea turtle nesting grounds. If sea levels rise significantly higher than this, which is expected, many more vital nesting sites will be threatened.

CMS is working on different fronts to endeavour to minimize these impacts and allow migratory species to cope with changes: CMS COP11 (11th Meeting of the Conference of Parties to the Convention) adopted a Programme of Work on climate change and migratory species. Identification and implementation of adaptation measures are important in the case of migratory species.

However, it is also thought that for many species these might not be sufficient particularly under the worst climate change scenarios. Mitigation is therefore also necessary. In this regard, CMS fully supports policies towards the rapid increase of renewable energy capacity.

However, as many other developments, renewable energy technologies can have negative impacts on the environment. In the case of migratory species, there is already such evidence. CMS, AEWA (Agreement on the Conservation of African-Eurasian Migratory Waterbirds) and BirdLife International produced a review of these impacts that was presented at COP11. But we are seeing negative impacts from the mitigation measures aimed at reducing climate change.

Here are some examples:

A recent (2014) publication has estimated the mortality of bats in the U.S. per year at up to 900,000. Some species are more susceptible than others. The hoary bat, a long-distance migrant, appears to be particularly affected.

Soaring birds such as birds of prey are also particularly badly affected because they have long reproduction cycles, so even small losses to collisions can have a huge impact on populations.

Power lines are one of the major causes of unnatural deaths for birds in a large part of the African-Eurasian Flyways with, for example, many millions of birds falling victim to collisions each year in Germany alone.

The problem is also believed to be serious in Africa. In South Africa, for example, the survival of several critically endangered species, such as the blue crane, is believed to be severely threatened due to collisions with power lines.

As much as 66 per cent of young Cape vultures were electrocuted or killed by flying into power lines, according to a new study on this threatened species.

There are only 12,000 of these birds still alive, with about 80 per cent of the global population in South Africa.

These impacts are too high a price to pay and can be avoided. Impacts can be minimized at a cost that we can afford; we know how to do it and we can further improve our approaches. There are win-win solutions that we can adopt.

By doing so, we will contribute to achieving several other SDGs, those directly addressing the conservation of biological resources such as SDGs 14 and 15 in the first instance, as well as other goals relying on natural resources for their achievement. The SDGs relating to human health, and agriculture and food production SDGs also depend heavily on migratory species and the ecosystem services they provide.

One criticism made of the Millennium Development Goals was that they not properly integrated. The same charge cannot be levelled at the SDGs which have been designed to be complementary so that they can all achieved harmoniously and without conflict. So, we should seek to deploy renewable energy technologies in ways that do not compromise the conservation of endangered species.

Adoption of guidelines by CMS COPs and AEWA Meetings of the Parties (MOPs) will minimize the impact of renewable energy technologies deployment on migratory species and powerlines.

An energy task force as a mechanism to promote the implementation of the guidelines and their further development is needed.

The coordination and activities of the Energy Task Force has been funded with a contribution granted by the German Government, through the Federal Ministry for the Environment, Nature Conservation, Building and Nuclear Safety (BMUB). The aim has been to bring stakeholders together to discuss ways and means of deploying new technologies safely from the perspective of conservation.

To this end, the German Government was recognized as Champion Plus for its generous support and commitment towards Reconciling Energy Sector Developments with Migratory Species Conservation for the period 2015-2017.

We are at a critical stage and sustainable funding is needed - and is being sought - to ensure that the Energy Task Force delivers on its work in the years to come. It is important to ensure that the guidelines that we have published are adopted into national legislation and into environmental impact assessments. It is a work in progress, much has been done, more is being done but there is also much more still to do.