Opinion: Forty Years of Action for Animals on the Move 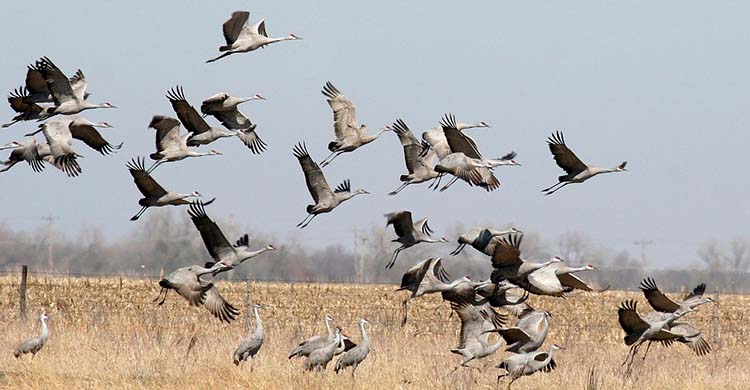 A new study has highlighted gaps in protection for migratory birds globally © pixabay.com

BONN (IDN) – This year marks the 40th Anniversary of the United Nations’ Convention on the Conservation of Migratory Species of Wild Animals (CMS), the only global agreement between countries aimed at protecting thousands of terrestrial, oceanic and avian animals such as elephants, antelope, gorillas, whales, dolphins, sharks, rays, and many species of birds – that fly, walk or swim across the planet. In February 2020, India will be hosting the 13th Meeting of the Conference of the Parties (COP) to CMS in the city of Gandhinagar.

Over the past 40 years, the Convention on Migratory Species also known as the Bonn Convention has grown to engage over 160 countries as Parties or as members of one or more of its numerous agreements on specific species, such as the global effort on sharks, or geographical areas, such as Central Asia, where the steppes and mountains are home to Saiga Antelopes, Bukhara Deer and other rare and endangered mammals.

CMS is on the front lines of efforts to protect species and their habitats in the face of many new and increasing threats, such as energy facilities including windfarms, loss and fragmentation of habitat from agriculture, roads and urban sprawl, and, in the ocean, by-catch from fisheries, noise, ship strikes and plastic pollution. Climate change is altering habitats and causing shifts to existing migration routes, leading to new challenges as species press beyond their historical pathways.

Since its inception, CMS has achieved some key policy successes, and tangible results on the ground.  For example, its guidelines on linear infrastructure have led to modifications of the fence along the Trans-Mongolian railway, which allow antelopes, gazelles and wild horses to migrate unhindered. Best practices for wind energy facilities have reduced   collisions with birds and bats, with minimal costs.

Protecting migratory species and their habitats not only helps them but it is also directly beneficial to us humans. They connect us and provide invaluable services, such as pollination of plants, dispersal of seeds, pest control, not to mention lifting our spirits and playing a role in many religious traditions.

The need for international action to ensure the survival of migratory species is greater than ever. The recently published assessment from the Intergovernmental Science-Policy Platform on Biodiversity and Ecosystem Services (IPBES) found alarming trends on the loss of biodiversity, including a prediction that we may lose one million species to extinction in coming decades.

Migratory species are particularly vulnerable, depending as they do on having a series of sites where they breed, raise their young, rest and spend the winter, and having food available at the right time to build up reserves of energy so that they can complete their long, arduous, and increasingly hazardous journeys.

Some species have undergone dramatic, even cataclysmic declines pushing them to the edge of local or even global extinction. Extensive fishing of sharks has reduced some populations by as much as 90 per cent. Vultures in South Asia have suffered extensive losses because of poisoning by a pharmaceutical drug used on livestock.

The IPBES report sounded an alarm bell. To respond effectively, we need to act at a scale never seen before. The assessment succeeded in catapulting biodiversity onto the front pages of the world’s media and has garnered high-level political attention.  France’s President Macron declared biodiversity to be as important an issue as climate change, the June 2019 G20 meeting of Environment Ministers in Japan recognized that food security, protecting biodiversity, and reducing emissions are inextricably linked, and the Pope tweeted that every creature has a role, and none is superfluous.

There are several opportunities at our doorstep to heighten awareness and action for migratory species.  First, is the ongoing process to hammer out a new global biodiversity strategy, which will be adopted in 2020 by a sister UN agreement – the Convention on Biological Diversity.

To succeed, the new global strategy needs to pay much more attention to the connectivity of migratory species populations and the geographic areas among which they move to survive. Ecologically connected areas are key not only for species but also for ecosystem resilience to climate change, maintaining genetic diversity, and integrating nature into human landscapes such as urban areas and agricultural zones.

Second, as human populations grow, cities expand, and investments in new infrastructure soar, there will be a major need to optimize economic growth, social development and conservation in a way that achieves the common goals of the UN Sustainable Development Goals (SDGs). The SDGs were intended to be implemented as a package deal, reflecting the value of nature to both economic growth and development.

Third, the International Finance Corporation and the World Bank recently adopted improved environmental standards for potential impacts of infrastructure and other investments on biodiversity and ecosystem services. These need to be taken up widely, by regional development banks, sovereign banks and private investors to ensure that we get the balance right.

Forty years after the signing of CMS, it is time to pay more attention to migratory species. If the planet is unable to sustain wildlife, it is not only an indictment of our stewardship of nature, it also means that there is trouble brewing for us too.

Amy Fraenkel, Acting Executive Secretary of the UN Convention on the Conservation of Migratory Species of Wild Animals