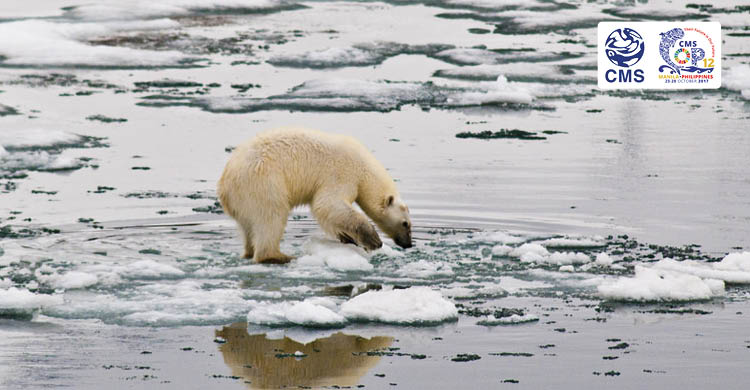 Manila, 21 October 2017 - The effects of climate change are being felt with extreme weather events such as the wildfires in British Columbia, floods in Eastern Canada and hurricanes of unprecedented severity battering North America and the Caribbean.

Wildlife is also suffering the consequences, and migratory animals already at greater risk because of their dependence on a fragile chain of sites to sustain them are more vulnerable than sedentary species.

Climate change is now likely to be the greatest driver in biodiversity loss in the coming years, rivalling by-catch (the capture of unintended species while fishing), habitat loss and poaching.

Government representatives will gather in Manila, on this Monday through Saturday, at the year’s most important conservation meeting — the Conference of the Parties to the Convention on Migratory Species, the only global treaty dedicated to the conservation of wildlife that crosses international borders.

Although a world leader in the fight against climate change, Canada has yet to sign the convention, but will at least be sending an observer to Manila.

Whether governments choose to implement those measures is another matter.

Wildlife relies primarily on habit and instinct. It is true that many species are adapting to changing circumstances, and some are even thriving, but others are not adjusting their behaviour — or not adjusting it fast enough.

There will be some winners — those animals that can expand their range to new habitats. Others will adapt and cope with new circumstances, but some will be less fortunate; the losers will be forced out of their niches, finding nowhere else to go, being outcompeted for food or becoming prey to the new arrivals.

Changes in animals’ distributions, the expansion and contraction of the migratory species’ ranges, are already occurring. Terrestrial species are edging toward the poles at a rate of 17 kilometres per decade, marine species four times faster.

The loss of sea ice is forcing polar bears southwards and they are now encountering North American brown bears. Scientists have now confirmed instances of resulting wild hybrids, known either as “grolars” or “pizzlies,” depending on the parental combination.

These types of changes to the natural order can have serious consequences for an economy, food security and human health, as tropical fish start to encroach on and destroy important kelp forests and tick-borne illnesses, such as Lyme disease, become more prevalent in northern latitudes.

It is not all doom and gloom. There are actions that can be taken to lessen the impact of climate change on wildlife.

Hunting regimes can be altered, with the open season adjusted to reflect changing migration patterns. Protected areas can be established, although in the context of climate change there are concerns that they may not remain suitable for the species for which they are designated.

So steps must be taken to ensure that the network of sites needed by migratory species is made available.

Parties to the Convention on Migratory Species recognize wild animals as an irreplaceable part of the Earth’s natural system and that each generation has an obligation to the next to ensure that resources of the planet are conserved.

This year’s conference will focus on a series of practical measures with immediate impact that will safeguard the most vulnerable species, whose migratory behaviour makes them reliant on there being appropriate conservation policies in place all along their migration path.

Predictions point to the likelihood that climate change will have devastating effects on some species and then humans will suffer, as we depend on animals for food, pollination, seed dispersal, pest control and scores of other services, economic, ecological and cultural.

As Canada and other countries start to implement the Paris Climate Agreement, we need to remember that not only are animals among the victims of climate change, they are also important protagonists in the fight to combat it as they play a crucial role in ensuring that healthy oceans and forests can continue to perform their vital function as carbon sinks.

By Bradnee Chambers, the Executive Secretary of the Convention on the Conservation of Migratory Species of Wild Animals.