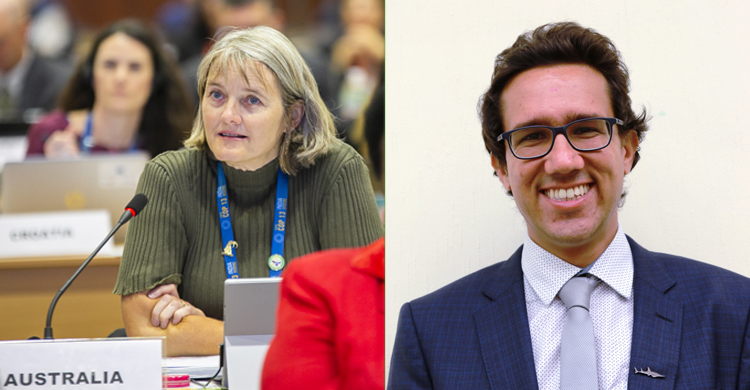 Narelle Montgomery (Photo: ENB/IISD) and Daniel Fernando are the new Chair and Vice-Chair of the CMS Scientific Council and its Sessional Committee

Bonn, 24 November 2020 – As announced in Notification 2020/017 the elections for the posts of Chair and Vice-Chair of the CMS Scientific Council and its Sessional Committee have taken place.  The successful candidates are Narelle Montgomery of Australia, who is the new Chair, and Daniel Fernando of Sri Lanka, who is the new Vice-Chair.

Narelle has worked on wildlife issues for the Australian Government for over 25 years, and attended her first CMS COP in 1999, when COP6 was held in Cape Town, South Africa. She was instrumental in drafting and negotiating the CMS daughter instrument, the Agreement on the Conservation of Albatrosses and Petrels, which entered into force in 2001. Narelle has focused continuously on CMS matters since 2009.  Narelle has been Australia’s Scientific Councillor to CMS since 2012. When not at work, Narelle enjoys spending time with her family, riding her horses and, since COVID-19, took up a new hobby of geocaching - thanks mainly to her Oceania colleague, Graeme Taylor!

Having greatly enjoyed working with both Elizabeth Mrema and Bradnee Chambers on many important CMS initiatives, including the successful development of the Convention’s implementation review mechanism, and a number of Single Species Action Plans of interest to Australia, I am looking forward to working with Daniel, Amy and the CMS team to progress critical items of work during the intersessional period.

Daniel is a Sri Lankan marine biologist and the co-founder of Blue Resources Trust; a marine research and conservation organization, where he leads the Sri Lanka Elasmobranch Project. Since 2013 he has been providing technical support toward elasmobranch management policy at conventions such as CITES and CMS, helping bridge the gap between science and policy and encouraging a shift toward sustainable fisheries. He has served as a ministerial advisor, is currently a member of the IUCN SSC Shark Specialist Group for Asia, and a MCAF (Marine Conservation Action Fund) Fellow.

2020/017: Election of the Chair and Vice-Chair of the Scientific Council and its Sessional Committee
In Memoriam: Fiona Bartlett
National Focal Points - Dugong MOU