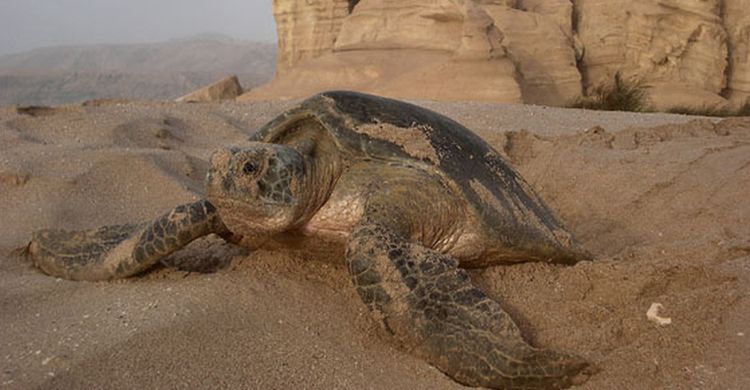 Bonn, 12 September 2014 - Representatives and observers from 25 countries have reached agreement on a suite of measures that will strengthen efforts to conserve marine turtles in and around the Indian Ocean.

These charismatic animals – threatened by illegal hunting and egg harvest, coastal development, fisheries by-catch and marine debris in many parts of their range – took centre stage at a week-long meeting held in Bonn, Germany, home of the Convention on Migratory Species (CMS).    International conservation efforts for six turtle species are co-ordinated by an intergovernmental agreement operating under the CMS umbrella, known as the Indian Ocean – South-East Asia Marine Turtle Memorandum of Understanding (IOSEA).

A highlight of the meeting was the formal launch of the IOSEA Network of Sites of Importance for Marine Turtles, capping a decade-long effort to develop a common framework for site-based conservation actions.

“The launch of the IOSEA network of sites is a major milestone for transboundary conservation of marine turtles in the Indian Ocean”, said Douglas Hykle, who has led the IOSEA programme, based in Bangkok, since 2003.  “The network will help to focus and connect a wide range of conservation efforts under an exciting new partnership”.

The IOSEA Marine Turtle Site Network is expected to promote linkages between the terrestrial, near-shore and oceanic habitats used by turtles during their life cycles, and also to encourage more co-operation and better co-ordination of conservation activities which typically rely on limited financial resources.

All of the sites were deemed to be of particular importance for marine turtles and other biodiversity, after a rigorous selection process that carefully evaluated their many ecological and other attributes.

The Bonn meeting also reviewed progress towards implementation of the comprehensive IOSEA Conservation and Management Plan, and made recommendations in several other important areas.  These include the investigation of illegal take and trade of marine turtles, especially problematic in South-East Asia, as well as studies of the human dimension of marine turtle use and conservation.   Ways of addressing known threats to marine turtles, such as accidental drowning in fishing operations and disturbance from light pollution at nesting beaches, also received special attention.

At the start of the meeting, CMS Executive Secretary Bradnee Chambers noted that key threats to marine species will also be high on the agenda at the upcoming 11th Meeting of the Conference of the Parties to the Convention on Migratory Species, set to take place in Ecuador from 4 to 9 November 2014.  “Targeted action taken under the framework of this global wildlife convention can help to effectively address many of the threats marine turtles face, including from wildlife crime, marine debris and climate change”, he said.  “As the meeting in Bonn has demonstrated, the IOSEA Marine Turtle agreement under CMS is a very effective tool for stimulating international cooperation and conservation action for marine turtles in the Indian Ocean. It is one of the most successful of the CMS family of instruments aimed at promoting the conservation of migratory species world-wide”.

The Memorandum of Understanding on the Conservation and Management of Marine Turtles and their Habitats of the Indian Ocean and South-East Asia puts in place a framework through which States of the Indian Ocean and South-East Asian region, as well as other concerned States, can work together to conserve and replenish depleted marine turtle populations for which they share responsibility.  Its membership currently stands at 35 Signatory States from across the region.

The Seventh Meeting of IOSEA Signatory States was held from 8-11 September 2014 in Bonn, Germany, home of the Convention on the Conservation of Wild Animals of Migratory Species (CMS) – an international treaty administered by the United Nations Environment Programme (UNEP).