Migratory Species Banners on Display Outside UN Premises in Bonn 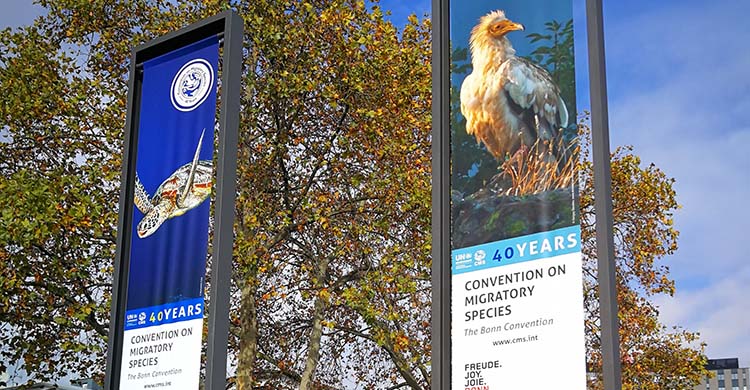 Banners of a Green Turtle and an Egyptian Vulture close to the UN Campus, marking the 40th anniversary of the Convention @ Florian Keil

Bonn, 18 November 2019 – A total of nine large street banners featuring well-known migratory species such as the African Elephant, Leopard and Monarch Butterfly are currently on display outside the UN Premises in Bonn, Germany.
The banners mark the 40th Anniversary of the Convention on Migratory Species (CMS) and show a small selection of migratory species protected under the Convention, which is also the oldest UN Organization in Bonn.
Forty years ago, the negotiations concerning an international treaty to protect migratory wildlife reached a successful conclusion, giving rise to CMS, also called the “Bonn Convention” – after the city in which the treaty was signed. Nowadays, it is the only global treaty dealing with migratory species and their habitats across the world. Recently, CMS membership reached 130 with the Republic of the Maldives joining the Convention. Further information on the CMS history can be found in the CMS Anniversary Timeline.
The CMS species banners have been created by the CMS Secretariat in close cooperation with the City of Bonn and will remain visible throughout November to coincide with a series of important CMS meetings taking place at the UN Premises this month: 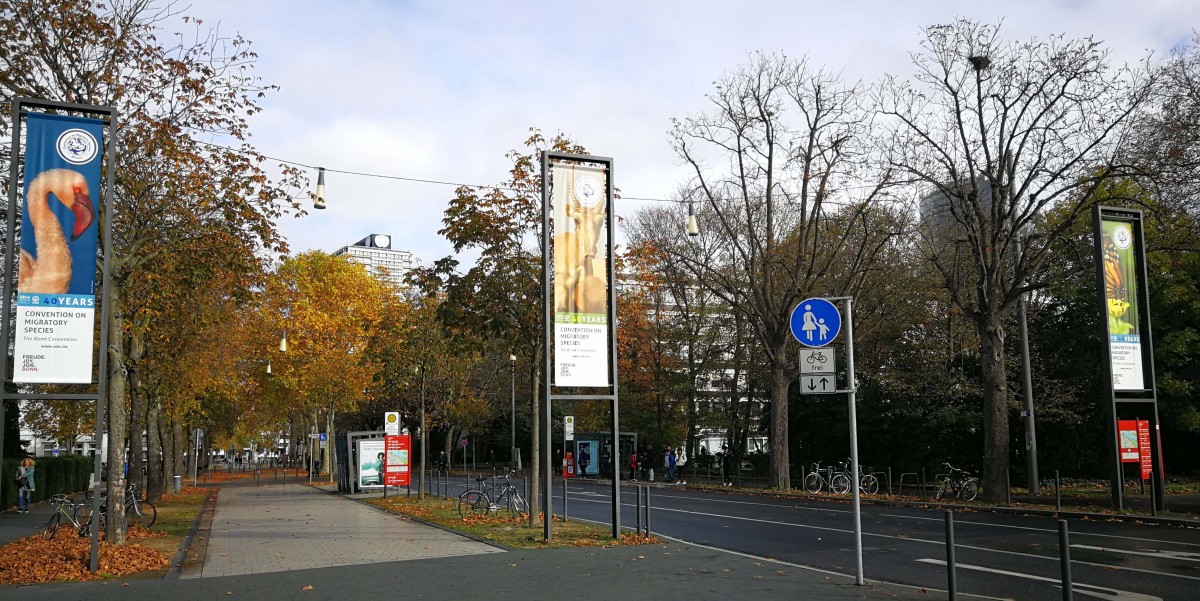 The CMS banners depict nine migratory species covered by the Convention which are under threat and listed on the CMS Appendices. Below is a short description of each of the species you can find along both Heussallee and Welckerstraße outside the UN Bonn Campus.

The African Elephant is a genus comprising two living species, the African bush elephant and the smaller African forest elephant. Both species have been listed as vulnerable on the International Union for Conservation of Nature (IUCN) Red List since 2004 and are threatened by habitat loss and fragmentation. Also, poaching for the illegal ivory trade is a threat in several range countries.

The Leopard is one of the five extant species in the genus Panthera. Leopard populations are threatened by habitat loss and fragmentation and are declining in large parts of their global range. Leopards are hunted illegally, and their body parts are smuggled in wildlife trade for medicinal practices and decoration. The Leopard benefits from better protection under the Joint African Carnivores Initiative between CMS and the Convention on International Trade in Endangered Species of Wild Fauna and Flora (CITES).

The Egyptian Vulture is found from the Iberian Peninsula and North Africa to India. The species breeds in temperate regions, migrate south in winter, while tropical populations are relatively sedentary. Populations of this species declined in the 20th century and some island populations are endangered by hunting, accidental poisoning, and collision with power lines. The Egyptian Vulture is one of 15 species covered by the Multi-species Action Plan to Conserve African-Eurasian Vultures under the auspices of the CMS Memorandum of Understanding on the Conservation of Migratory Birds of Prey in Africa and Eurasia.

The critically endangered Green Turtle can be found throughout tropical and subtropical seas around the world, with two distinct populations in the Atlantic and Pacific Oceans, and in the Indian Ocean. Sea turtles are at risk from human activity such as poaching, egg harvesting, bycatch in fishing gear, and pollution.

The Monarch Butterfly is famous for its annual southward late-summer/autumn migration from the northern and central United States and southern Canada to Florida and Mexico. There is increasing concern related to the ongoing decline of Monarchs at their wintering sites; numbers have dropped more than 50 per cent since 1997 in some places by more than 90 per cent since 1995.

The Whale Shark is a slow-moving, filter-feeding carpet shark and the largest known extant fish species. The species holds many records for size in the animal kingdom, most notably being by far the largest living non-mammalian vertebrate. The IUCN considers the species to be endangered due to the impacts of fisheries, such as bycatch, and vessel strikes, combined with its late maturation. It is listed, along with other species of shark, under the CMS Memorandum of Understanding on the Conservation of Migratory Sharks.

The Saiga Antelope is a Critically Endangered species that used to roam a vast area of the Eurasian steppe zone from the foothills of the Carpathian Mountains and Caucasus into Dzungaria and Mongolia. Today, it is only found in a few places in the Russian Federation, Mongolia, Turkmenistan, Uzbekistan and Kazakhstan. In the 1990s, Saiga numbers plummeted from 1 million animals to only 50,000. The Saiga's decline being one of the fastest population collapses of large mammals recently observed, the CMS Memorandum of Understanding Concerning Conservation, Restoration and Sustainable Use of the Saiga Antelope aims to address threats and restore the population status of these nomads of the Central Asian steppes. Countries recently agreed on a new set of conservation priorities.

The Dusky Dolphin is found in coastal waters in the Southern Hemisphere with major populations around South America, south-western Africa, New Zealand, and various oceanic islands. The Dusky Dolphin is listed on Appendix II of CMS and benefits from international conservation efforts through tailored mechanisms such as the CMS Global Programme of Work for Cetaceans.

The Lesser Flamingo is a species occurring in sub-Saharan Africa, with another population in India. Despite being the most numerous species of flamingo, it is classified as near threatened due to its declining population and the low number of breeding sites, some of which are threatened by human activities. It is covered under the African-Eurasian Migratory Waterbird Agreement.
The CMS Secretariat would like to thank the City of Bonn for its cooperation in the project and for helping to raise awareness of the Bonn Convention.