In Memory of Lui Bell 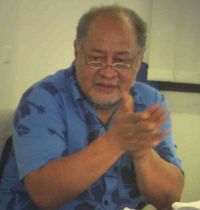 Bonn,
30 November 2012 - It was with deep regret
that the CMS Secretariat team heard about the sudden death
of Lui Bell, Marine Species Adviser at the Secretariat of
the Pacific Regional Environment Programme (SPREP) on 29
November 2012.

Lui was a true champion for migratory species
conservation in the Pacific Islands Region, who with passion
and skill worked with stakeholders at all levels. His support
was crucial for the negotiation of the CMS Pacific Islands
Cetacean MOU, which was concluded in 2006 and its implementation
since then. Lui also worked with CMS on matters relating
to turtles and dugongs, and has been supporting the CMS
Pacific Officer since her appointment in early 2012.

Lui always was a pleasure to work with
or meet socially – his friendly, humorous personality
will be fondly remembered and sorely missed!

We take comfort knowing that Lui’s work will live
on both through the Marine Species Action Plans that were
developed under his guidance, and through the people that
he trained and inspired. It is now up to all of us to take
the baton and carry marine species conservation in the Pacific
Islands Region forward despite this sad and sudden loss
– in memory of Lui!

[link
to SPREP's In Memoriam]