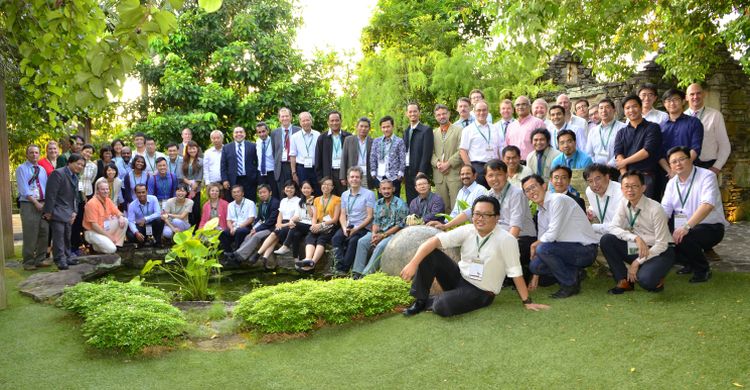 participants in the AMBI meeting

Bonn 18 January 2017- Two important avian meetings took place back to back in Singapore early in 2017. The first one (8-10 January 2017) was a meeting of the Arctic Migratory Birds Initiative (AMBI), a group that operates under the Arctic Council’s CAFF (Conservation of Arctic Flora and Fauna). This meeting focussed on the topic of illegal hunting of birds in the East Asian-Australasian Flyway and heard a number of presentations on the situation in China, Japan, Republic of Korea and the Russian Federation. Especially encouraging was the news about the recent passing of a new biodiversity law in China which prohibits the use of poison and mist nets for trapping birds, and increases the level of protection for a number of globally threatened species. The CMS Secretariat gave a presentation about the Mediterranean Task Force on illegal killing, taking and trade of migratory birds (MIKT), as a case of best practice in achieving intergovernmental cooperation to mitigate IKB in this region.

The second meeting was the 9th Meeting of Partners to the East Asian-Australasian Flyway Partnership (EAAFP, 11-15 January 2017). EAAFP is a Partnership launched in 2006 which aims to protect migratory waterbirds, their habitat and the livelihoods of people dependent on them in the East Asian-Australasian Flyway.  The EAAFP has 35 partners including 17 countries, 6 Inter-Governmental Organizations, 11 International NGOs and 1 private enterprise. CMS has been a Partner since 2006. The Secretariat is located in the city of Incheon in the Republic of Korea

The main highlights of the meeting were the creation of a task force on illegal hunting, taking and trade of migratory birds along the flyway, modelled on the one set up under CMS for the Mediterranean. Terms of reference for this new group were agreed. The establishment of this task force is a milestone that will no doubt help countries address the high levels of illegal hunting and unsustainable harvest that take place in the region. The first activity of the task force will be to undertake a situation analysis of illegal hunting in order to better understand the population impact, the species affected and the hotspots were it takes place.

Another important item was the adoption of an Action Plan for the Far Eastern Curlew, a species included in Appendix I of CMS.  The Far Eastern Curlew is the largest shorebird in the world and is endemic to the East Asian-Australasian Flyway.  Evidence from Australia suggests a decline of 80 per cent in the last 30 years. It is considered Endangered by IUCN. A task force to monitor the implementation of the Action Plan is also in place. The meeting also heard updates on the situation of Baer’s Pochard a critically endangered species with of a population of only ca 400 individuals, and Spoon-billed Sandpiper. For the latter species, a new breeding area discovered in 2015 in Russia was confirmed and 16 pairs were found during the 2016 breeding season. There is also good news from Bangladesh and Myanmar where conservation activities will be receiving support from the Disney Foundation and WWF.

In the Ducks Working Group, a subgroup was established to set up a task force on the Lesser White-fronted Goose with the aim of developing an action plan for the eastern population. This action plan will effectively complement the existing one for the western population which operates under AEWA. The subgroup will include China, the Russian Federation, the Republic of Korea and Japan.

Under the EAAFP there is a Flyway Site Network which includes more than 130 sites in 17 countries. During the Meeting of Partners new sites were inscribed from Japan (1), Mongolia (5), Australia (4), USA (1), Vietnam (1) and Philippines (1). Each site received a certificate for the new designation.

The CMS Secretariat highlighted CMS COP12 in Manila in October 2017 as a great opportunity to raise awareness on migratory species conservation in the region. The EAAFP is planning an active participation in the COP and will organize a side event to highlight the importance of the East Asian-Australasian Flyway for migratory birds.

The USA was appointed as Chair of EAAFP until the next Meeting of Partners and Singapore as Vice-Chair.