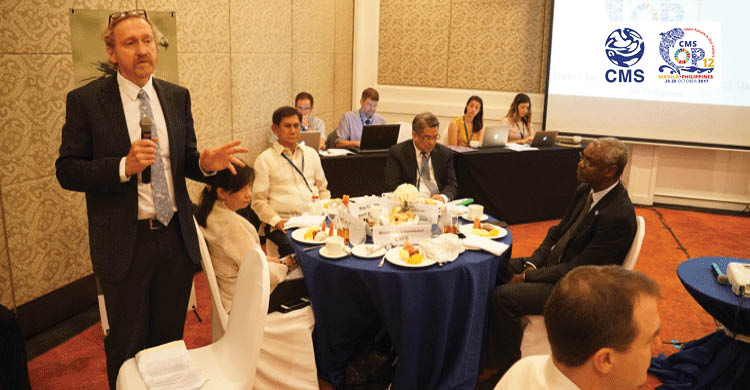 Manila, 22 October 2017 - Government Ministers, business leaders and senior representatives from international organizations met today in the Philippines for frank talks on mitigating the detrimental impact of pollution on wildlife and ecosystems.

The outcome -  delegates pledged to step up efforts to combat pollution - will send a powerful signal to other leaders, ahead of the Third Session of the UN Environment Assembly (UNEA3), which takes place in December, in Nairobi, Kenya.  It will also stimulate debate at this week’s Conference of the Parties to the Convention on Migratory Species (COP12).

The high-level consultation, attended by German State Secretary, Rita Schwarzelühr-Sutter, Minister of the Philippines, Roy Cimatu, and Deputy Minister of Brazil, José Pedro de Oliveira Costa took place on the eve of the Convention’s triennial Conference of the Parties, which will link wildlife conservation to the UN Sustainable Development Goals. COP12 will stress the contribution of wildlife to development, with the underlying message that action to protect wildlife is necessary for human advancement.

Over 37 leaders attended the breakfast meeting, organized by UN Environment in collaboration with the Secretariat of the Convention on the Conservation of Migratory Species of Wild Animals (CMS). Those attending included 22 representatives of governments, 5 representatives of organizations such as the global conventions CBD and CITES, 10 representatives from the private sector including IKEA and the Plastic Bank.  Their discussions focused on three major threats for migratory wildlife, namely marine debris, pollution by pesticides and lead.

Bradnee Chambers, Executive Secretary of CMS said: “We know that air, land and water pollution is already posing a real threat to the well-being of humans and wildlife. It is gratifying that leaders, in their various areas of responsibility, have taken the decision today to work together and intensify efforts towards tackling this problem.”

“Of particular note were discussions around how to scale up innovative solutions that are already available. This means their commitments can lead to much-needed practical outcomes. I look forward to this being reflected in the COP12 debates about pollution and migratory species over the coming days.”

Ibrahim Thiaw, Deputy Executive Director of UN Environment, said: “Our continued pollution of migratory species, wildlife and natural habitats is damaging our health and our wealth. The outcomes from these meeting must now be taken up by political, industrial and civil leader at December’s UN Environment Assembly. We need to turn words into deeds if we are going to work towards a pollution free planet.”

Keynote speaker Peter Nitschke, of Plastic Bank said: “There is tremendous business potential for partnership with the private sector for innovation that reduces ocean debris.”

Following this morning’s consultation, a number of leaders agreed to sign up to UN Environment’s #BeatPollution pledge to make changes in their own life to contribute to a cleaner world. The pledge also calls on participants in Nairobi to take bold action to eliminate pollution in all its forms.

Dr Chambers explained: “The byproducts of our daily lives — sewage, exhaust, trash, agricultural chemicals, industrial emissions, noise, heat or light and more — make their way into the natural environment with ecological, health, social and economic impacts. Pollution is a growing global concern, threatening the well-being of people and wildlife alike.”

Sources of pollution in the marine environment range from human-generated noise, which can be deadly for some whales and reduce catch rates affecting fishing activities and communities, to intentional or accidental oil spills affecting entire ecosystems. In the terrestrial environment, light pollution is particularly severe at times and places where animal congregation and migration occur such as when marine turtle hatchlings seek their way to the sea. Pollution also takes the form of chemicals contaminating landscapes and accumulating when absorbed or ingested in the bodies of wildlife and people and affecting the food chain.

Marine debris can be harmful to humans and animals by causing direct injuries, damaging boat engines, destroying coral reefs, and entangling or choking animals. According to the report “Migratory Species, Marine Debris and its Management”, 192 species, comprising most marine mammals, several seabirds and all species of sea turtle have been shown to get entangled especially in abandoned, lost or discarded fishing gear. Ingestion of microplastic has proven to be even more dangerous to marine life: animals die or are severely affected after swallowing debris or by absorbing toxins carried by plastic.  High concentrations of such contaminants, which include pesticides, heavy metals and PCBs, can have health implications as they enter the marine food chain. for animals and humans alike.  Unless we act now, our oceans will be filled with litter, putting at risk over 600 species of marine animals, the livelihood of many coastal communities and the world’s food systems.

Pesticides do not just kill pests. They affect other animals too. Insecticides and rodenticides are the main pesticides dangerous to birds that feed on agricultural foliage and seeds. These substances can be lethal. Pesticides are also used illegally as poison bait to kill carnivores as a means of protecting both livestock and humans. Unfortunately, vultures too are lured to these baits and become unintentional victims.  Furthermore, in recent years, poachers have been deliberately targeting vultures using similar baiting techniques to hide their illicit activities – seeing birds circling above a kill is often how wardens become aware of poaching.  Improved global governance regulating these substances and promoting practices and substances safer for people, the environment and wildlife is of utmost importance.

Lead is a toxic heavy metal for which there is no safe exposure level for either humans or wildlife. Lead is still widely used in hunting and fishing activities poisoning millions of animals each year and contaminating land and waterways. Animals at every level of the food chain face varying degrees of exposure and range from frogs, mice and squirrels to ducks, swans and deer to eagles and bears - and people. Lead in the environment originating from spent ammunition is responsible for large-scale mortality in birds. Several migratory waterbird species are known to suffer from poisoning following the ingestion of lead fishing weights. Because of its toxicity and to protect human health and our environment, lead should be removed from ammunition and fishing weights as has happened with various paints, water pipes and some forms of gasoline. Dialogue and cooperation among the hunting and conservation communities, governments and related businesses need to be promoted to ensure the use of non-toxic alternatives.

The CMS Family and UN Environment have undertaken several initiatives to tackle the pollution challenge, while combining efforts with stakeholders from the public, private sector and the NGO world.

Pollution, People and Wildlife - a response from the CMS Family