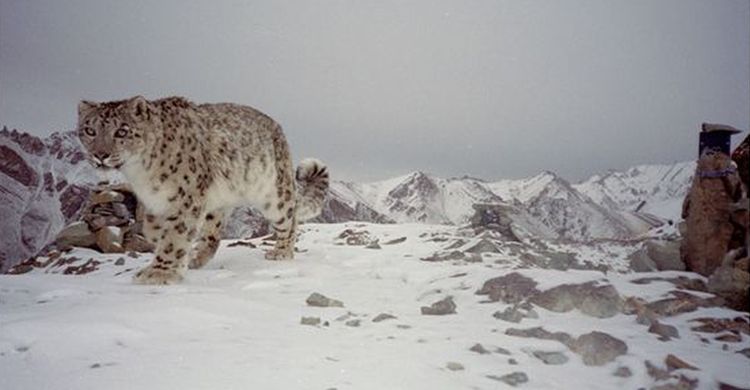 Bonn, 22 October 2014- Tomorrow is International Snow Leopard Day and it is being celebrated for the very first time this year, with special awareness raising and educational events being held in Bishkek Kyrgyzstan. Snow leopards are among the most enigmatic of wild cats. With between 4,500 and 7,500 animals remaining in the wild today, they are also among the most threatened.

Their long-term survival is far from assured, and despite being protected on Appendix I of the Convention on the Conservation of Migratory Species of Wild Animals (CMS) as well as in the Red Data Books in each of the twelve countries in which they occur, the species has been extirpated from some parts of its historic range.

In 2013 on the initiative of the Kyrgyz government, representatives of the twelve Central Asian Snow Leopard Range States came together in Bishkek, Kyrgyzstan to endorse the Global Snow Leopard and Ecosystem Protection Program (GSLEP) to conserve snow leopards and the high-mountain ecosystems they live in. The Forum also called upon Range States to declare the year 2015 as the International Year of the Snow Leopard, and October 23 as an annually celebrated Snow Leopard Day.

Snow leopards move to different altitudes along with the summer and winter migrations of their prey animals. They are largely solitary and live at low to very low densities in mountainous rangelands at elevations from 600 to more than 5,000 metres above sea level. The estimated size of their range is about 1.8 million km2, with the largest share (60 per cent) in the Tibetan plateau of China.  Some Central Asian countries may have lost over 40 per cent of their snow leopards in the past two decades as economic hardship even forced rangers working in protected area to poach and sell wildlife to feed their families. Conservation of the species is a challenge because there is limited knowledge about these populations and specific threats including habitat loss, poaching and human and snow leopard conflict.

Snow leopards are one of the 15 species of large migratory mammals – other include the Saiga antelope, Mongolian and Goitered gazelles, Wild camel, Asiatic cheetah and Wild ass - covered by a new regional initiative developed under CMS. This Central Asian Mammals Initiative aims at enhancing the conservation of those species and their habitat and includes a programme of work outlining key activities to foster transboundary cooperation and communication as well as to address major threats to the species and promote overall coordination of existing conservation efforts, such as the GSLEP. The programme of work of the Central Asian Mammals Initiative will be presented for adoption at the upcoming 11th Meeting of the Conference of the Parties to the Convention, which will take place on 4-9 November in Quito, Ecuador.