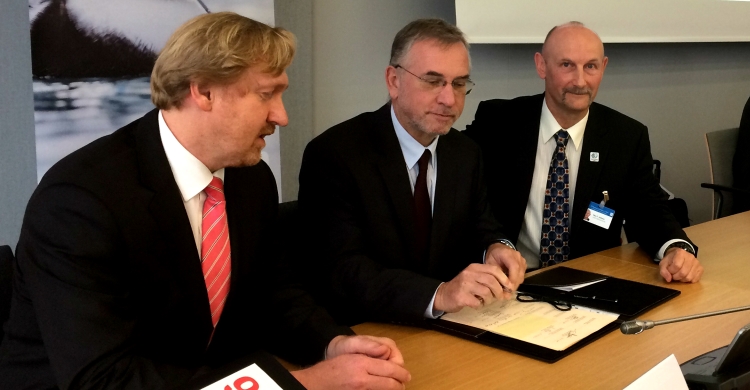 Bonn, 11 November 2015 - Today, Croatia and Israel signed the CMS Memorandum of Understanding on the Conservation of Migratory Birds of Prey in Africa and Eurasia (Raptors MoU), which has now attracted 55 Signatories.  An official signing ceremony took place during the 6th Session of the Meeting of the Parties to the Agreement on the Conservation of African-Eurasian Migratory Waterbirds (AEWA) in Bonn, Germany.

His Excellency Ranko Vilović, Ambassador of the Republic of Croatia to the Federal Republic of Germany, and Dr. Ohad Hatzofe, Avian Scientist from Israel Nature and Park Authority, signed the Raptors MoU on behalf of their respective governments.  Welcoming these two new Signatories to the Raptors MoU, Nick Williams, Head of the Coordinating Unit of the Raptors MoU, said:

“Both these countries are strategically important for the conservation of migratory birds of prey.  Croatia is located on the Adriatic Flyway and also hosts important breeding populations of White-tailed Sea Eagle (Haliaeetus albicilla) and Eleonora's Falcon (Falco eleonorae). Israel lies on the Eastern Mediterranean Flyway, the second largest migratory corridor in the world with over a million raptors passing through each spring, including virtually the whole global populations of both Lesser Spotted Eagle (Clanga pomarina) and Levant Sparrowhawk (Accipiter brevipes)”.

As Signatories to the Raptors MoU, Croatia and Israel are now better placed to engage in coordinated and cooperative actions to conserve migratory birds of prey.

The Raptors MoU will enter into effect in Croatia and Israel on 1 December 2015.