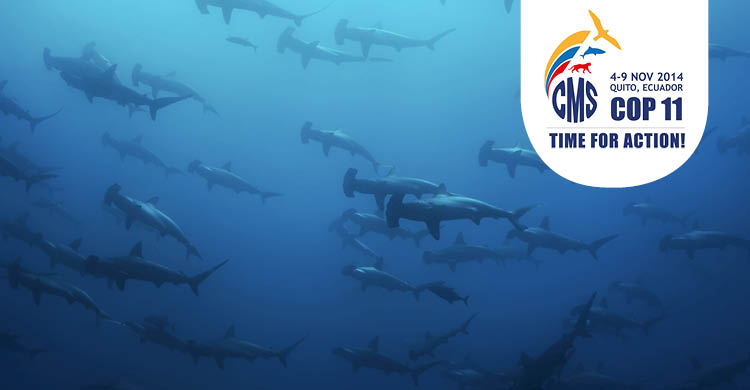 Quito, 4 November 2014 - Sharks are swimming in troubled waters. In the light of severe declines in many populations of sharks and rays, government officials are considering actions that could help turn the tide for some of the most imperiled of these species.

A record number of shark and ray species have been proposed for listing under the Appendices of the UNEP Convention on the Conservation of Migratory Species of Wild Animals (CMS).  Sharks, rays and sawfish make up 21 of the 32 proposals for new listings on the CMS Appendices. A landmark decision might well be about to be taken at the 11th Meeting of the Conference of Parties (COP) which began today and will run until 9 November in Quito, Ecuador.

CMS Executive Secretary Bradnee Chambers said: “The CMS Conference of the Parties offers an important opportunity to boost the global conservation of some highly threatened sharks and rays. The proposals to list 21 additional sharks and rays species on the Convention reflect the interest of a growing number of countries to promote recovery of these biologically vulnerable and ecologically important fish. These proposals, if accepted by CMS Parties, can pave the way for more effective shark and ray conservation action by the international community in the years to come.”

According to an alarming analysis by the IUCN Shark Specialist Group (SSG) published in January this year, an estimated quarter of the world’s more than 1,000 shark and ray species are threatened.

The SSG highlighted overfishing as the main threat to sharks and rays. The species have long been sought for their meat and fins, and -- in some cases – their unique gills and snouts, and are also taken in substantial numbers by fisheries targeting other species.  The SSG has stressed that rays are generally more threatened and less protected than sharks.

Most shark and ray species are exceptionally vulnerable to overexploitation because they grow slowly, mature late and have few young, compared with other fish species. Manta rays, for example, give birth to only one pup every two years. These animals have roamed the world’s oceans for more than 400 million years and play key roles in marine ecosystems.

A growing number of countries are acknowledging the importance of sharks and rays and the urgent need to stop declines, and yet most shark and ray fishing nations lack effective safeguards for the species.

At the CMS COP, governments will consider internationally coordinated conservation measures for migratory species over the next three years and decide which of the species put forward should be listed under its two Appendices.

Kenya has proposed all five species of highly endangered sawfish for listing of both Appendices, while Fiji has proposed the nine species of mobula ray and the Reef Manta. The very similar Giant Manta was listed on both CMS Appendices in 2011.

CMS can play a role in initiating and encouraging greater collaboration among countries toward better conservation of sharks. Listing of the proposed species of sharks and rays could build political momentum to stop the dramatic decline of these exceptional marine creatures.

Sawfish have been globally depleted over the last century due to fishing pressure, including bycatch, and loss of critical habitats, such as mangroves. While exacerbating their entanglement, sawfish snouts (or “rostra”) have long been sought for cultural purposes, medicine, and curios, while sawfish fins are among the most prized for shark fin soup. Having been wiped out completely from large parts of their original ranges, they are amongst the world's most endangered marine fish. In an effort to boost conservation efforts, the IUCN Shark Specialist Group recently launched a global sawfish recovery strategy, which includes a goal of listing all species in the CMS Appendices. After success in banning international trade in sawfish, Kenya is seeking to address through CMS the additional threats facing sawfish, such as bycatch mortality and habitat destruction.

The reef manta ray, which undertakes large scale migrations, frequenting different habitats comprising coastal reefs and the pelagic zone, and their close relatives, the Mobula rays, are under threat by the international trade in gill plates and unregulated catch in both artisanal and industrial fisheries. While the global population of reef manta is estimated to have decreased by 30 per cent according to the IUCN Red List, their numbers plummeted by up to 86 per cent in certain regions within the last eight years. Manta and Mobula rays would benefit from strict protection through listing on CMS Appendix I.

Around the globe, populations of great and scalloped hammerhead sharks have undergone dramatic declines in recent decades, ranging between 60 and 99 per cent. The IUCN SSG has categorized these two hammerheads as globally Endangered and the most threatened of the world’s highly migratory, pelagic and semi-pelagic sharks. Hammerheads have exceptionally valuable fins and are also taken for their meat, often as juveniles. In the light of overfishing and the lack of adequate regulatory mechanisms, the proponent countries -- Ecuador and Costa Rica -- consider the inclusion of the species in CMS Appendix II as an important step towards restoring their populations.

The silky shark is commonly caught, often as bycatch, in high seas long line and purse seine fisheries. Several populations have been depleted with estimated losses of 90 percent or more in some regions. The Egyptian Government is proposing the species for listing in the CMS Appendices, in hopes of reducing fishing mortality to sustainable levels.

All three thresher species are classified by the IUCN SSG as Vulnerable, making this group among the most threatened shark families. In its proposal to list bigeye, common, and pelagic thresher sharks in Appendix II, the European Union alerts CMS Parties to the species’ declines around the world. Thresher sharks are caught and killed in targeted fisheries and as bycatch.

Convention on the Conservation of Migratory Species of Wild Animals

The UNEP Convention on the Conservation of Migratory Species of Wild Animals (CMS), also known as the Bonn Convention, after the city where the treaty was signed, works for the conservation of a wide array of avian, aquatic and terrestrial endangered migratory animals worldwide through negotiation and implementation of agreements and species action plans. With currently 120 member countries, CMS is a growing convention with a special mandate to strengthen international conservation efforts for the world’s migratory animals.

Listing on CMS Appendix I carries an obligation on Parties for strict protection, such as bans on take. Appendix II listing commits countries to coordinate transboundary conservation measures throughout the species’ range.

The CMS Memorandum of Understanding on the Conservation of Migratory Sharks (Sharks MOU) is the first global instrument for the conservation of migratory species of sharks. It was concluded in 2010 and currently has 36 signatories.