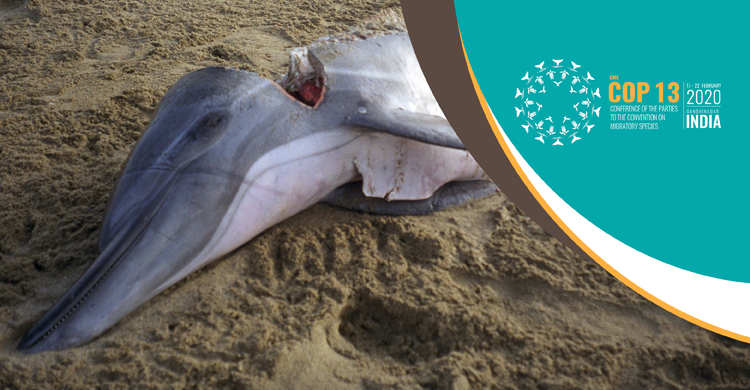 Bonn, 10 February 2020 - Decisions at CMS COP13 will result in targeted action on aquatic wild meat, which is a fast-emerging threat on a scale similar to that facing terrestrial animals.

The CMS Aquatic Wild Meat Working Group – which has focused mainly on mammals and reptiles -  is poised to expand its scope to cover all shark and ray species listed on CMS Appendix I. Criteria will also be developed to consider aquatic species listed on Appendix II, while more attention will be given to the harvesting of seabirds.

Across tropical, temperate, sub-Arctic as well as Arctic regions, people’s reliance on aquatic wild meat has grown: whales, dolphins, sea cows (sirenians), turtles, crocodiles and seabirds are increasingly being targeted as a direct consequence of declining fish stocks.  Overfishing (often by distant-water fishing fleets), climate change, the scarcity of other meat sources, and poverty are all drivers.

Harvesting aquatic wild meat has an impact on wild animal populations, sometimes to the point of local extinction, and can upset the ecological balance. Research shows that in small-scale artisanal fisheries, bycaught species are frequently retained and consumed. Humans are also affected when butchering and eating this meat, which is often highly contaminated with industrial products or chemicals.

Despite these risks, aquatic wild meat remains an important source of protein for poorer communities.  Involving local fishermen and women - especially those that traditionally depend on CMS-listed species for their livelihood - is critical if aquatic wild meat harvests are to be properly managed.

More work on this complex issue will be undertaken in the coming three years. The Working Group will continue to serve as an expert resource for governments and facilitate international cooperation by advising and assisting CMS in cooperating with other multilateral environmental agreements.