Giraffe Could Get First International Protection Measures at CMS 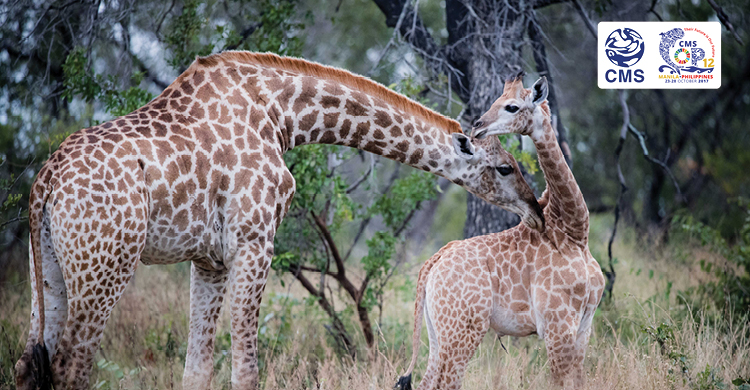 Numbers of Giraffes have plunged by almost 40 per cent over the past 30 years, according to IUCN © John Birch

Manila, 24 October 2017 - The giraffe may be given international protection under the Convention on Migratory Species (CMS), which meets next week in Manila, the Philippines.

Reaching up to six metres tall, Africa’s graceful giants are the world’s tallest animals and once roamed throughout the continent’s savannah regions in large herds.

Today, giraffe live under threat in fragmented populations across sub-Saharan Africa. According to the International Union for Conservation of Nature (IUCN), numbers have plunged by almost 40 per cent over the past 30 years. There now are less than 100,000 animals left throughout the continent, with notable declines in East and Central Africa. Wild giraffe are now extinct in at least seven countries: Burkina Faso, Eritrea, Guinea, Mali, Mauritania, Nigeria and Senegal. However, as a positive, populations are increasing in Southern and West Africa.

“It is time to take action to conserve them before it is too late. As one of the most iconic species in the world, we hope that CMS can provide a regulatory framework under which giraffe will better be conserved.  Throughout their range in Africa, giraffes regularly move across transboundary country borders and it is only through an increased understanding of their plight coupled with targeted conservation actions will we able to curb their demise. Hopefully the world can come together and stick their neck out for giraffe and list them under CMS.”

Experts say the drop in numbers is the result of human encroachment with a resulting loss of habitat and food supply. Increasing development and associated infrastructure such as bridges, roads and fences are impacting on their migratory paths and in some countries, poaching is a problem, particularly in East and Central Africa. Drought and climate change – as well as armed conflict, are also contributing to their demise.

While protected across most of its range, the giraffe would benefit from protection under CMS – the first international body to do so. CMS is uniquely placed to facilitate increased collaboration across conservation range States and a listing on Appendix II would improve awareness and management of their plight internationally.