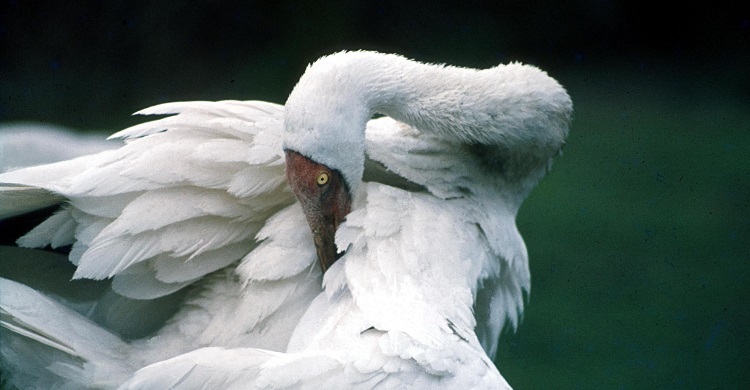 On Wednesday, 5 September, Vladimir Putin, the President of the Russian Federation, participated in the “Flight of Hope” Project for the reintroduction of the endangered Siberian Crane. President Putin arrived near the breeding grounds of the critically endangered cranes in West Siberia on 5 September in order to support the project, meet project staff and local conservation agencies as well as to join a training flight with the young cranes in a micro-light aircraft.

The idea of the “Flight of Hope” Project was born in Russia in the 1990s and discussed by Range State signatories of the Memorandum of Understanding concerning Conservation Measures for the Siberian Crane in the framework of the Convention of Migratory Species (CMS). It is part of a wider reintroduction programme and was developed based on a similar project called “Whooping Crane Eastern Partnership” for saving the very rare Whooping Crane in the North America. The goal of the project is to lead captive-bred Siberian cranes along their migration routes – normally the role of adult cranes to show their offspring the annual migration flyway from the breeding grounds to the Southern wintering sites. Experience shows that chicks successfully return to the place, where their previous migration started after they have learned the migration route in spring.

Currently the Western/Central population is estimated to comprise only 10-20 individuals. Efforts on the Siberian Crane conservation and reintroduction have been undertaken since the 1970s with cooperation of Russian scientists and the International Crane Foundation (ICF). In 1979, the breeding centre for rare cranes was constructed in Oka State Nature Reserve for creating a captive Siberian Crane population with a view to reintroducing them into the wild.

After hatching, ten Siberian Crane chicks were reared in the Oka Crane Breeding Centre and were trained to follow the micro-light (alterantively knownas an ultra-light or deltaplane) during their feeding. In August 2012, seven more strong chicks were transported to the breeding grounds in West Siberia, where training flights continued. Hopefully, the participation and interest of President Putin in this project will contribute to its successful implementation and attract greater attention for the conservation of rare species.