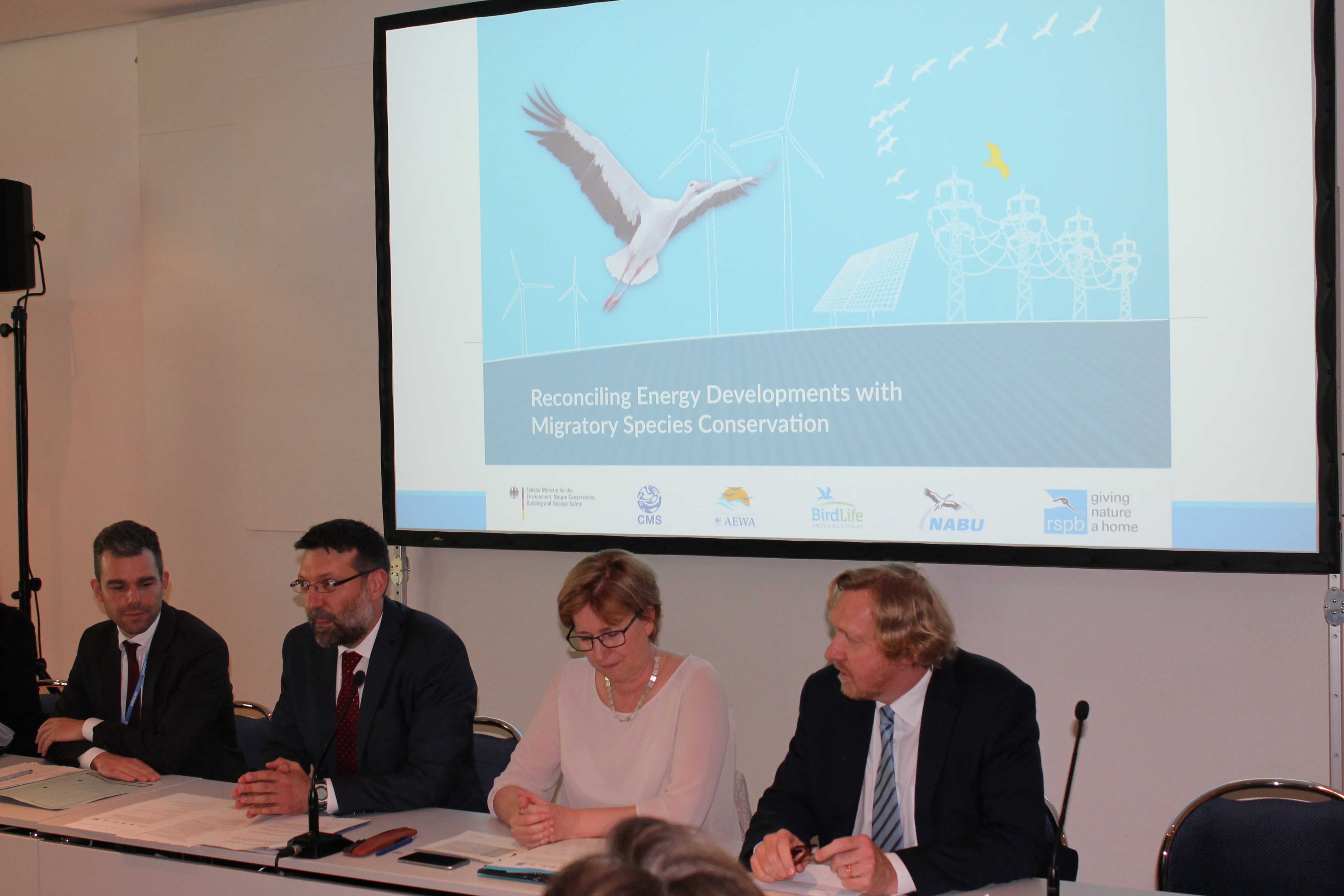 Bonn, 23 May 2017 - Members of the Energy Task Force, including the CMS and AEWA Secretariats, BirdLife International, and the German Ministry for the Environment (BMUB) joined forces at the UNFCCC Bonn Climate Change Conference to raise awareness of the importance of reconciling migratory species conservation with the deployment of renewable energy and power lines globally.

The BirdLife family was also represented at the meeting, and Ms. Aida Kowalska, the Energy Task Force Coordinator, Mr. Edward Perry from BirdLife International, Mr. Eric Neuling from the Nature and Biodiversity Conservation Union (NABU) in Germany, and Mr. John Lanchbery from the Royal Society for the Protection of Birds (RSPB) in the UK all gave presentations.

The UNFCCC has near-universal membership, 197 countries having ratified the Convention to become Contracting Parties. A breakthrough achievement was the Paris Agreement which entered into force on 4 November 2016 and has since stimulated greater investment in renewable energy globally.

The side event speakers supported the goals of the Paris Agreement which requires the scaling-up of renewable energy to meet the climate change targets but also emphasized that the deployment of renewable energy technologies can have unwanted impacts on migratory species.  These impacts, however, can largely be avoided through appropriate planning and mitigation measures. CMS established the Multi-stakeholder Task Force on Reconciling Selected Energy Sector Developments with Migratory Species Conservation – the Energy Task Force - to address this global issue.

The side event showcased a range of best practices for deploying renewable energy technologies and power lines in ways compatible with migratory species conservation, such as how the BESTGRID partnership between transmission system operators and civil society has increased community acceptance of power lines in Germany; development of a spatial map of ecological risks of renewable energy technologies in the UK, the 2050 Energy Vision; and the Migratory Soaring Birds best practice - shut-down on demand of a wind farm project in Egypt, where  one of the world’s largest bird migrations between Africa and Eurasia takes place.

A set of guidelines on the appropriate deployment of renewable energy technologies and power lines and the application of mitigation measures has been developed by the CMS Family. The Energy Task Force is a partnership among environment and energy sectors of Governments, Multilateral Environmental Agreements, international organizations, energy developers, investors and other energy initiatives which aims primarily at promoting the use of the guidelines and their further development.

The Government of the Federal Republic of Germany, through BMUB, were recognized as Champion Plus for their generous support and commitment towards Reconciling Energy Sector Developments with Migratory Species Conservation for the period 2015-2017.

The coordination and operation of the Energy Task Force have been funded with the contribution granted by Germany under the Migratory Species Champion Programme.