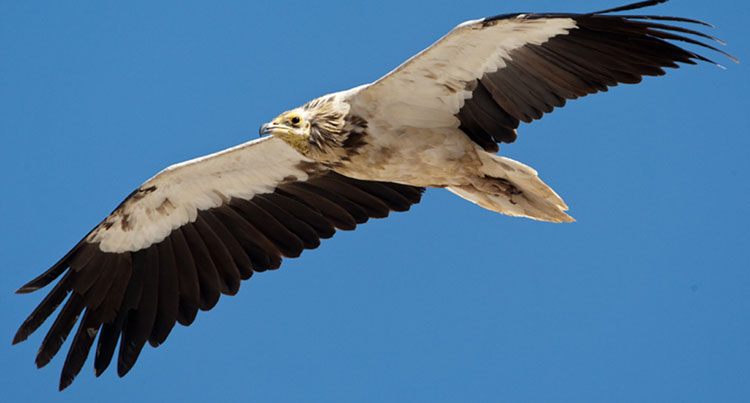 Bonn / Abu Dhabi, 13 July 2015 – Government officials, NGOs and experts from over 30 countries met from 5 to 8 July  in Sofia, Bulgaria, to develop a Flyway Action Plan for the Egyptian Vulture.  For the first time more than 70 representatives from Africa, Asia and Europe came together to save one of the most endangered species of birds of prey on earth.  The meeting was jointly organized by the Bulgarian Society for the Protection of Birds (BirdLife Bulgaria) in the frame of the LIFE+ project “The Return of the Neophron” (www.LifeNeophron.eu), and the Memorandum of Understanding on the Conservation of Migratory Birds of Prey in Africa and Eurasia (Raptors MOU), which was concluded under UNEP Convention on Migratory Species (CMS).

“International cooperation among the range countries is essential, if we want to halt the dramatic decline of Egyptian Vulture populations. The meeting in Sofia was an important step in this direction”, said Bradnee Chambers, CMS Executive Secretary.

Most Egyptian Vulture populations are migratory, with individuals flying up to 4,000 km from breeding grounds in Europe, the Caucasus and Central Asia to wintering grounds in Africa.  During their long and arduous journeys they face a range of threats, mostly associated with human activities. In recent years, massive and rapid population declines have been observed in virtually all parts of its range.

Nick P. Williams from the CMS Raptors MOU said:  “The international experts have identified key threats, which represents an important step forward to developing a Flyway Action Plan. The challenge now will be to engage with all the stakeholders, understand their motivations and then work together to find win-win solutions to implement the Plan and safeguard the species’.

A Declaration adopted at the meeting highlights critical threats including: poisoning, due to persecution of predators or inappropriate use of agricultural chemicals and the use of lead shot; insufficient amounts of accessible food caused by habitat degradation due to changes in land-use, intensification of agriculture and modern sanitation practices; electrocution on medium voltage power poles, as well as collision with power lines and wind turbines.

The Egyptian Vulture, by feeding primarily on carcasses of dead animals provides a natural waste disposal service and plays a vital role in preventing the spread of diseases such as anthrax and rabies. Due to their habit of cleaning up organic waste in the environment, the status of the species can be considered an indicator for healthy ecosystems.

An existing EU Species Action Plan for the Egyptian Vulture, covering European countries, has been in place since 2008.  An evaluation of the EU Plan commissioned by the Raptors MOU was presented at the meeting.  The new Flyway Action Plan for the Balkan and Central Asian populations will draw upon experience and adopt lessons learned.

The Convention on Migratory Species (CMS) works to conserve avian, terrestrial and aquatic specie across their range. It has 120 Parties. www.cms.int

The CMS Memorandum of Understanding on the Conservation of Migratory Birds of Prey in Africa and Eurasia (Raptors MOU) covers 76 species and extends to over 132 Range States and territories in the African-Eurasian Region. It has 52 Signatories (51 countries and the European Union) and 3 Cooperating Partners. www.cms.int/raptors