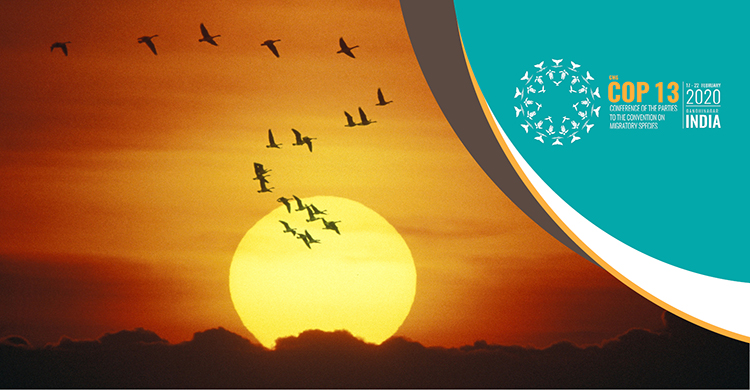 Gandhinagar, 16 February 2020 - The Convention on Migratory Species (CMS) is to evaluate the impacts of climate change on a range of focal species and ecosystems with a view to helping species adapt to a warming world.
Last month was the hottest January ever recorded with global temperatures 1.14 degrees Celsius above the 20th century average. It follows the second hottest year on record, and the warmest decade since records began, according to the UN.
Increased warming and associated climate extremes are becoming the norm, and this is affecting migratory species - and the ecosystems on which they depend - in profound and complex ways.
These impacts come on top of other threats to the survival of migratory species, including the direct destruction or degradation of their habitats and the unsustainable harvesting of species for food and body parts. Many populations are declining sharply, and immediate action is needed if they are to survive.
“This Conference is a key opportunity to take action to help migratory species to adapt to the rapidly changing climate. Many species populations  are declining significantly to previously unseen levels, and are in need of urgent action to help protect their habitats. Importantly, action is possible in many cases and we need to work together to enhance the value of such efforts.
CMS can play a key role in providing analysis, context and coordination for countries around the world in helping species survive in a changing environment”, said Professor Colin A. Galbraith, CMS Appointed Councillor for Climate Change.
As well as being important in their own right, many migratory species play a key role in our own survival, providing a number of services ranging from food supply (for example, fisheries) to maintaining ecosystems through pollination, the control of agricultural pests or seed dispersal. Some species, such as whales, provide high economic value through ecotourism.
CMS will be evaluating the impacts of climate change on a range of focal species and ecosystems in a bid to identify what actions are required to aid their survival. CMS will also review actions by countries around the world to learn what works in a range of situations.
An initial set of fact sheets will be presented to delegates at CMS COP13 showing actual and projected climate change impacts on selected migratory species and some of their critical habitats.
Species being reviewed are:
Example of ecosystems on which Migratory species depend are:
A special side event ‘Climate Change Adaptation – How Can Migratory Species Survive?’ is being held at 18:00 on Tuesday, 18 February as part of the meeting of the Conference of the Parties, where participants will have the opportunity to consider the key issues and actions required to help the world’s iconic migratory species.