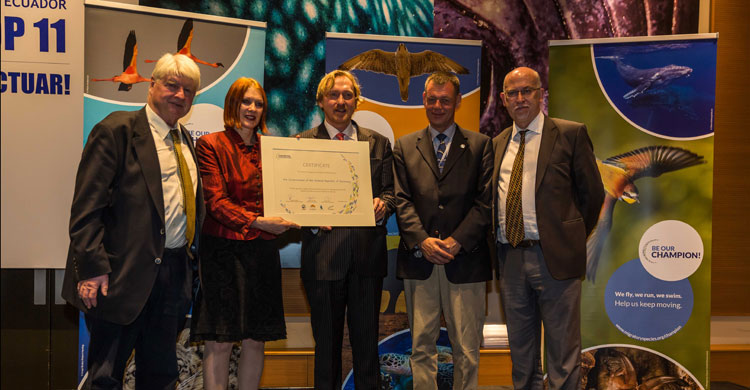 Quito, 4 November 2014 - the Migratory Species Champions Programme was launched on the eve of the opening of the Conference of the Parties, which is being hosted in Quito by the Ecuadorean Government.  Master of Ceremonies of the event was CMS Ambassador, Stanley Johnson, the environmental journalist and writer.

Elsa Nickel collected the certificates on behalf of the German Government, which was recognized as Champion Extraordinaire for hosting CMS and three regional Agreements, AEWA, EUROBATS and ASCOBANS and as Champion Plus for its commitment to African elephant conservation 2015-2017.  His Excellency, Patrick van Klaveren, the Monegasque Ambassador to Spain, also received two certificates on behalf of the Principality of Monaco, as Champion Extraordinaire for hosting the ACCOBAMS Secretariat and as Champion for marine species.  Australia’s leading role in the next three years in conservation of the Loggerhead turtle in the Pacific region has been rewarded with Champion status; Geoffrey Richardson, Head of the Australian delegation collected the certificate.

The Migratory Species Champion Programme aims to promote the work under the CMS Family and encourage sustainable and predictable support. It has been designed to raise and recognize commitments to provide for medium and long-term resources for conservation actions.  Governments, companies, organizations and individuals that are willing to support efforts to conserve migratory species and their habitats can become Champions if they undertake to provide mid- or long-term funding to one or more specific CMS Family initiatives.

With five Champions awarded, the Programme has got off to a flying start and it is hoped that further Champions will emerge in the coming months and years.

The Migratory Species Champions Programme has a dedicated page on the CMS Family common portal, accessible here.  More information can be obtained from Laura Cerasi at the UNEP/CMS Secretariat.