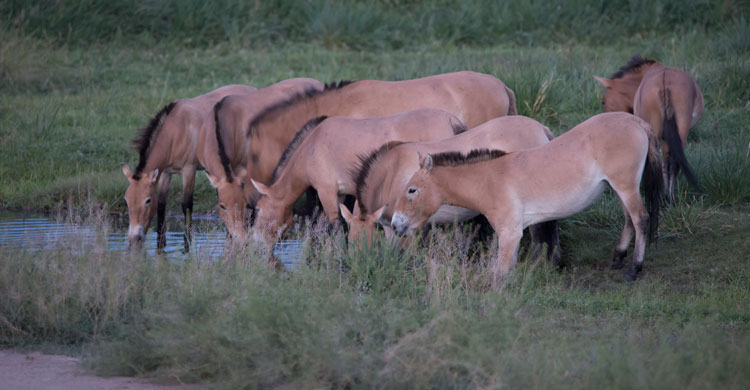 Bonn, 12 December 2017 - The CMS Secretariat is pleased to announce the addition of Przewalski’s Horse, Gobi Bear, and Steppe Eagle, all proposed by Mongolia, to the CMS Appendices at COP12.

Przewalski’s Horses were last seen in 1969 in the wild near Mongolian border in Trans-Altai Gobi. The population is currently estimated to consist of more than 50 mature individuals free-living in the wild for the past seven years. This taxon is threatened by small population size and restricted range, potential hybridization with domestic horses, loss of genetic diversity, and disease. As the population size is small, it is vulnerable to stochastic events such as severe weather.

Przewalski’s Horses play a crucial role in the ecosystems where they live. Their grazing helps the vegetation to regrow and the pasture can be re-used by other herbivores. The foals are a main source of food for wolves in Hustai National Park. The remains are scavenged by foxes, vultures and other scavengers.

Gobi Bears are listed as a Critically Endangered population of Brown Bear in the IUCN Red List of Endangered Species, and are found only in the extreme environment of the Gobi Desert of Mongolia. Population estimates indicate that less than 45 remain. Most of the population is found in the Great Gobi Strictly Protected Area in Mongolia; however, GPS satellite telemetry demonstrated that one individual travelled west into the Tien Shan Mountains of China and remained there for about a month before returning.

The Gobi Bear together with Wild Bactrian Camel is considered as an umbrella species of Gobi ecosystem. It means that the conservation of this species will help to protect other wildlife species in the Gobi region. It is expected that at the next CAMI Range State meeting, there will be a discussion about whether this species will also be protected under the CAMI program, thus falling under its Program of Work.

The Steppe Eagle is a migratory raptor which has undergone extremely rapid population declines within its European range and rapid declines in other parts of its range. The speed and severity of these declines justified the species being moved from ‘Least Concern’ to ‘Endangered’ in the 2015 IUCN Red List assessment.

The Steppe Eagle is a higher trophic level species and therefore performs a key role in shaping natural ecosystems. With other soaring birds, it provides important ecological services, particularly in agricultural landscapes where it controls pest populations, such as rodents, and disposes of carrion.

As with all species, listing is only the first step, to be used as a tool to help Parties work together in conserving these three iconic species.