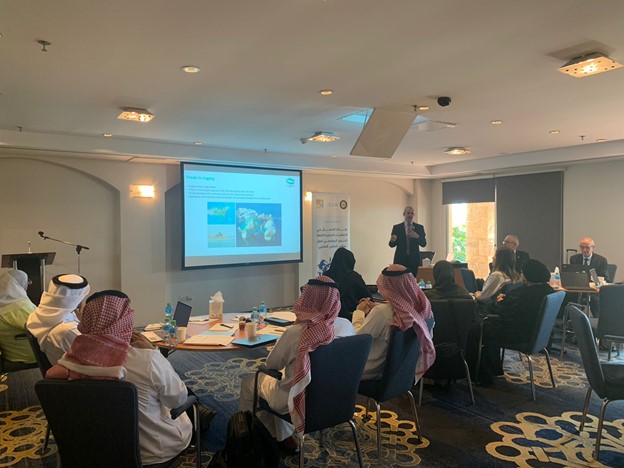 On 30th and 31st May 2022, the Gulf Cooperation Council (GCC), UNEP Regional Office for West Asia (ROWA) and the Kuwait Environment Public Authority (EPA) co-organized a workshop for representatives from GCC countries to raise awareness of biodiversity-related Multilateral Environmental Agreements (MEAs), and to build capacity in environmental diplomacy and negotiations in the region, particularly prior to upcoming Conferences of the Parties. Twenty-five representatives from Kuwait, Saudi Arabia, Bahrain, United Arab Emirates and Oman attended. Experts from the Convention on Biological Diversity (CBD), the Convention on International Trade of Endangered Species (CITES), UNEP ROWA and from the Convention Migratory Species (CMS) office in Abu Dhabi attended the meeting.

Sheikh Abdullah Al Ahmad Al Humoud Al Sabah, Chairman and Director General of the Kuwait EPA board, opened the workshop and welcomed participants. He was followed by opening talks by Majeed Al Akeel, representative of the GCC secretariat and by Sabine Sakr, Regional Development Coordinator from UNEP ROWA. Each MEA then presented, with talks by Neil Pratt on behalf of the CBD and Thea Caroll on behalf of CITES. Representing the CMS Abu Dhabi office, Umberto Gallo Orsi provided a general overview of the CMS as well as a detailed description of the Raptors Memorandum of Understanding, and Gabriel Grimsditch presented the respective Memorandums of Understanding on Dugong, Sharks and Indian Ocean and South-East Asia Turtles. Sabine Sakr provided a focused training session on enhancing negotiation skills at MEA conventions. The workshop included interactive sessions and lively discussions with the Member States, who displayed a keen interest in the processes and mandates of the biodiversity MEAs.

Umberto Gallo Orsi reflected that “by raising awareness of the CMS Dugong and Raptors MOUs in the region, the CMS Abu Dhabi office hopes to foster regional collaboration on threatened and migratory species in the GCC region - a region rich in both avian and marine migratory species. Regional collaboration is critical to the survival of migratory species as diverse as the sooty falcon and the dugong, as these animals cross national borders regularly and are not bound by political boundaries.” While Sabine Sakr highlighted “the importance of building capacities of Arab negotiators on biodiversity-related MEAs to align positions of like-minded groups and to focus the input and positions of GCC priorities ahead of the COPs.”