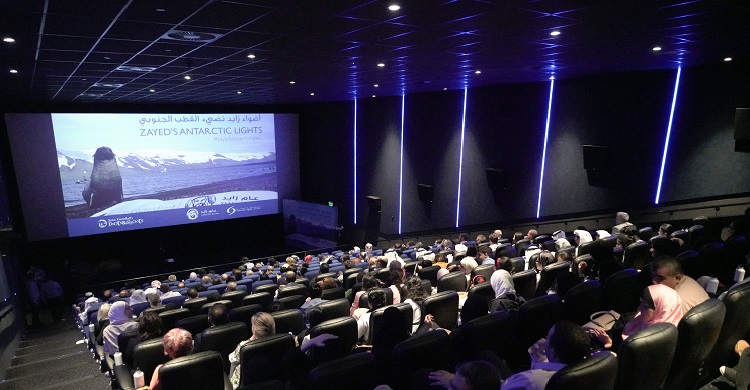 The film opened to a full audience of invited government representatives, local conservationists, and school students. The documentary explored the impacts of climate change on the fragile ecosystem that is Antarctica, and considered what effect climate change could have on the vulnerable ecosystems of the United Arab Emirates.

Team Zayed were joined by other teams from over 20 countries for the Climate Force International Antarctic Expedition, which was led by Sir Robert Swan – the first man to walk to both the North and South Poles.

During their time on board the Ocean Endeavour, Team Zayed braved the freezing conditions on deck to light up the sky with conservation messages using small solar lights. The message that Team Zayed shared:

Hi World - from Antarctica. Please listen: climate change and plastics are our challenge. Let's change. All of us. Individuals and countries. Stop. Think. Act. Energise. Be the Change. #ClimateForce

Following the documentary screening and a panel discussion, a number of Abu Dhabi schools were recognised for the fantastic efforts of their students to reduce single-use plastics and other waste.

The trailer for Zayed’s Antarctic Lights is available on the EAD YouTube Channel.