How Abu Dhabi is Saving the Dugong 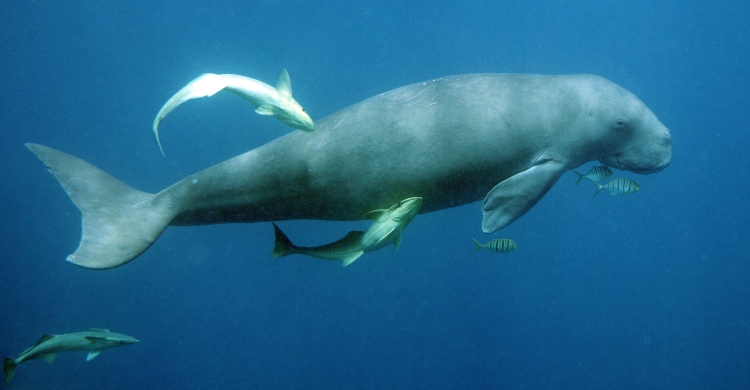 Rising pollution, coastal developments, boat traffic and bad fishing practices are contributing to a decline in the fortunes of the dugong — in Abu Dhabi and around the world.

Any threat to this huge migratory herbivorous mammal should be of critical concern to the billions of people who rely on the oceans for their livelihood, according to the website of the United Nations Environment Programme (UNEP).

“If the dugong, a key indicator species, is declining then the coastal environment that provides protein in the form of fish and income in terms of tourism is also being degraded,” it states.

Listed as vulnerable to extinction by the International Union for Conservation of Nature (IUCN), the UAE was among the first Middle Eastern countries to sign the 2007 international agreement on the conservation and management of dugongs and their habitat. The dugong’s known range stretches through tropical waters from East Africa to Vanuatu in the Pacific between about 26 degrees north and south of the equator.

Initiated by the Convention on the Conservation of Migratory Species of Wild Animals (CMS), signatories agree to take an integrated approach to conserve the dugong and its seagrasses, says Dr Donna Kwan, Programme Officer - Dugongs, CMS.

The Arabian Gulf is home to about 5,300 dugongs, of which almost 75 per cent live off the Abu Dhabi coast. It is the second-largest population in the world after Australia (including Papua New Guinea), which has up  to 95,000.

Securing international agreements among like-minded countries is not always easy, but Dr Kwan, responsible for the implementation of the agreement, is encouraging all 44 countries that have dugongs to sign, and so far 26 have done so.

“In this region, we need Qatar to sign. Yemen signed up early on, Saudi Arabia joined last year, while the UAE and Bahrain were the first Gulf countries to do so,” says Dr Kwan.

If Qatar signed too, it would show a formal commitment to protecting dugongs in the Gulf and allow the region to complete projects as a unified force.

Dr Kwan operates out of the CMS-Abu Dhabi office, which has been hosted by the Environment Agency — Abu Dhabi (EAD) for the past five years. The office represents a major collaboration between CMS and the UAE to conserve vulnerable migratory species.

“The EAD should be applauded for its support. We literally wouldn’t be able to do the work we do without it,” says Dr Kwan. “The EAD also actively supports CMS international agreements on migratory birds of prey and marine turtles.”

Funding is critical to reassess the status of dugongs at the regional level, says Dr Kwan, including aerial surveys, which, for the sake of accuracy, have to be completed in the entire Gulf around the same time to avoid duplicating numbers as dugongs are constantly on the move. The UAE is the only Gulf country that has been carrying out ongoing research and monitoring the marine mammals since 1999 via the team at the EAD headed by Dr Himansu Sekhar Das, Marine Threatened Species and Habitats, Terrestrial and Marine Biodiversity.

Dr Das points out that the figures they hold regarding the Arabian Gulf dugong populations are estimates. “Numbers can go up and down by 15 per cent, but we cannot afford to lose more than 15 per cent of our dugongs. That is why we have to start implementing conservation action now,” says Dr Das.

Deaths in the UAE

About ten dugongs die every year in the UAE, mostly from illegal or abandoned gill nets fishermen leave in the water for long periods. A dugong has poor eyesight but sharp hearing, so can easily swim into a net where it panics, rolls and gets trapped and suffocates through drowning.

Although not a targeted species as UAE fishermen know it is protected by law, by-catch is still the number one issue. “We don’t have data for the other countries, but are pretty sure that if they are catching fish using drift nets they are going to be catching dugongs in Bahrain, Qatar and Saudi Arabia too,” says Dr Das.

Traditionally, dugongs were hunted for food by local people and even appeared in the UAE’s fish markets in the 1970s, he adds. Dugong tusks have been used as sword handles and, in 2009, an archaeological dig on a small island off the coast of Umm Al Quwain unearthed dugong bones, believed to have been used for ceremonial purposes.

With regard to effectively addressing threats to dugongs today, Dr Kwan says the CMS assists developing countries to secure funding, envisage concepts and guide them to the technical experts as necessary. “Projects could include seagrass conservation, developing tourism projects or controlling the use of destructive fishing practices such as moving people off nets to using hook and line.”

Protecting the dugong’s seagrass meadows (their main source of food) in sheltered shallow water is essential because if there is not enough to eat, the dugong does not breed normally. The seagrass beds are also nurseries of fish, turtles and other marine life.

“The challenge is to design projects where the local people don’t lose anything in terms of food so the benefits of changing the way they fish outweighs what they are currently doing,” says Dr Kwan. “Including the seagrass ecosystem as well sends outs out a much stronger message to local people struggling to make a living.”

How about that connection with mermaids, then? Apparently that comes down to the animal's shape. When swimming, a dugong has a streamlined body and uses its whale-like fluked tail and front flippers resulting in slow graceful movements, which early sailors probably likened to mermaids. Biologists also note that female dugongs have large teats at the base of their flippers.