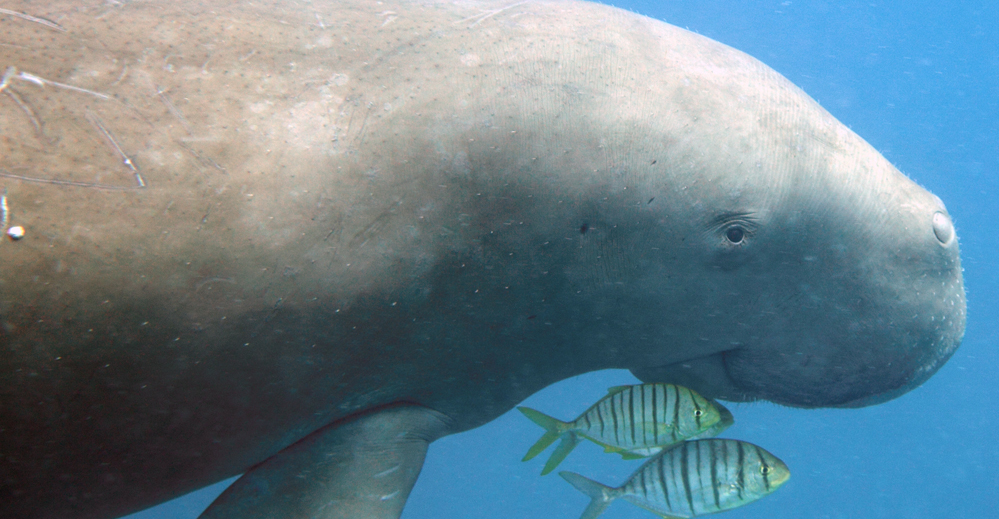 Abu Dhabi, December 2019 - From new protected areas in Timor-Leste, to the mapping of seagrass beds in the Solomon Islands, to investment in spirulina micro algae farms in Indonesia — these are just some of the tangible results of the Dugong and Seagrass Conservation Project which has reached out to more than 200 local communities in the Indo-Pacific Region.

Developed by the CMS Dugong MOU, the US$ 5.85 million dollar project, supported by the Global Environment Facility (GEF), targeted eight important Dugong Range States: Indonesia, Madagascar, Malaysia, Mozambique, the Solomon Islands, Sri Lanka, Timor-Leste, and Vanuatu. Thousands of people have been engaged via 43 different conservation projects.
The initiative focused on four main pillars: incentives to encourage community-based management of coastal marine resources, support for scientific research, support for local and regional-level conservation policies, and support for education and public awareness activities. As a result, national databases of seagrass habitats have been established in Indonesia, Sri Lanka and the Solomon Islands, while Indonesia, Sri Lanka and Vanuatu have created national databases of dugong populations.
In more than 200 locations, communities were engaged as stewards of the local marine resources. The approach encouraged combining traditional ways of managing resources with modern-day, science-based approaches. As a result, 45 new marine protected areas in Dugong hotspots have either been created or are under review. In addition, there are now more than 120 local community structures, invested in protecting Dugongs and seagrass beds, who will continue to be active even after the project’s completion.
The communities have also benefitted as the project has introduced them to alternative livelihoods with more than eight different income-generating models designed to support Dugong and seagrass conservation goals. In addition, a concerted effort was made to empower women. For example, in Timor-Leste, the country’s first ever female scuba diver was trained as part of community engagement activities.
The Dugong and Seagrass Conservation Project was a major international collaboration that leveraged funding by the GEF, along with financial and in-kind support from a number of Dugong Range States and organisations. The project was first conceptualized in 2012 by the Secretariat of the CMS Dugong MOU, which is part of CMS Office – Abu Dhabi and is hosted by Environment Agency – Abu Dhabi. In late 2013, the Dugong MOU Secretariat invited the Mohammed bin Zayed Species Conservation Fund to act as executing agency of the project, which kicked off in January 2015.
By the time of its completion in March 2019, the project had a major impact on the future prospects of Dugongs and their habitats. “All participating countries have the potential to enjoy-sustained, tangible benefits from the protection of seagrass ecosystems with conservation steps particularly beneficial to the coastal communities sharing the coastal marine ecosystems with Dugongs and other marine animals,” said Dr. Donna Kwan, Head of the Secretariat of the CMS Dugong MOU.
In addition, the Dugong and Seagrass Conservation Project has also acted as the impetus for another important international collaboration, this time — between the CMS Dugong MOU and the International Climate Initiative (IKI) of the Federal Ministry for the Environment, Nature Conservation and Nuclear Safety in Germany. Approved in early 2019 by the German government, the IKI Seagrass Ecosystem Services Project will be implemented between 2019 and 2022 in five Dugong Range States. The EUR 4.7 million initiative represents the first attempt to provide a detailed, site-specific assessment of seagrass ecosystem services through community capacity building. The information obtained will be used not only to create better policies, but also economic development opportunities connected to Dugong and seagrass conservation.
The Dugong and Seagrass Conservation Project is a valuable conservation initiative and one of a number of important outcomes that have resulted from the productive and successful collaboration between CMS Office – Abu Dhabi and Environment Agency – Abu Dhabi since 2009 when the Office in the United Arab Emirates was first established. The vision and strong long-term support of Abu Dhabi’s government, combined with the rich scope of a United Nations forum, is supporting the conservation of Dugongs, raptors and other migratory species, and promoting the well-being of associated human communities, to achieve the United Nations Sustainable Development Goals.
Read more about the unique partnership between CMS, EAD and the UAE, the establishment of CMS Office - Abu Dhabi and its achievements over the past decade here.