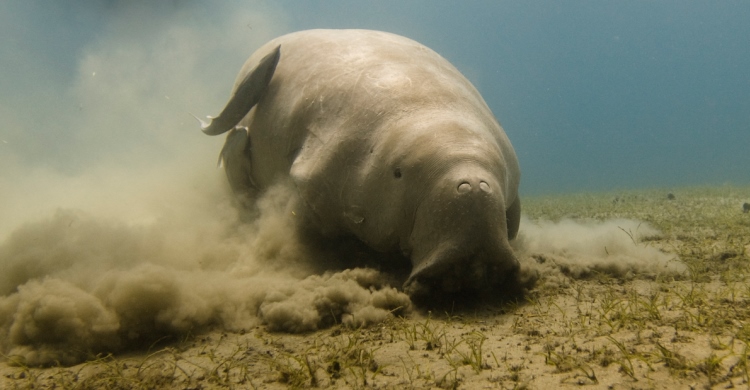 Abu Dhabi, November 2017 – The CMS Memorandum of Understanding on Conservation and Management of Dugongs and their Habitats throughout Their Range (Dugong MOU) just celebrated its ten year anniversary. The MOU came into effect on 31 October 2007 in Abu Dhabi, United Arab Emirates, which in 2009 became the home of the CMS Dugong MOU Secretariat.

Two meetings of the CMS Conference of the Parties in 2002 and 2005 called for the development of an appropriate instrument to conserve the dugong under CMS auspices: the initiative was led by the governments of Australia and Thailand in close coordination with the CMS Secretariat in Bonn, Germany. Two intergovernmental meetings on Dugong Conservation and Management were held in Bangkok, Thailand (in August 2005 and May 2006) under the auspices of CMS. The second meeting strongly endorsed the Dugong MOU and associated Conservation and Management Plan. A third meeting, held in Abu Dhabi, United Arab Emirates on 28-31 October 2007, concluded the negotiations and agreed the final text. At this meeting, Australia, Eritrea, France, Madagascar, Myanmar, Tanzania and the United Arab Emirates, were the first Signatories to the MOU.

The Secretariat would like to extend its sincere gratitude to Environment Agency – Abu Dhabi which on behalf of the Government of the United Arab Emirates has provided to the Secretariat significant and sustained core funding over the last ten years, without which many of the achievements of the CMS Dugong MOU could not have happened.

Here are some of the key achievements of the CMS Dugong MOU from the past ten years:

In addition to our core investor, Environment Agency – Abu Dhabi, the Secretariat would like to thank all of its partners, the Dugong Technical Group and importantly, the Signatory States, for working together to conserve dugongs and their seagrass habitats. We are looking forward to the next 10 years!