The Saiga antelope (Saiga tatarica and S. borealis mongolica) is a migratory herbivore found in Kazakhstan, Mongolia, the Russian Federation and Uzbekistan. The saiga generally inhabits open dry steppe grasslands and semideserts. Saigas in the 1990s underwent a catastrophic fall (~95%) in numbers due to poaching, decreasing from more than 1.5 million to 50,000 individuals across its range. Most of Saiga tatarica is found in Kazakhstan (over 97%) with smaller numbers occurring in the Russian Federation and Uzbekistan, whereas Saiga borealis mongolica only occurs in Mongolia.

Visiting the Saiga Area at the Ural – Food for Thought

Saigas and livestock in the Ural Steppe. © N. Ismailov

The population of Saiga (Saiga tatarica tatarica), which inhabits the steppes to the west of the Ural River in West Kazakhstan oblast, has grown from an estimated 12,000 animals to an estimated 801,000 in ten years, between 2012 and 2022. Because of this rapid growth, local farmers have increasingly complained about the impact of large Saiga herds on their hay meadows and pastures. Reacting to these complaints, in the summer of 2022 the Minister of Ecology, Geology and Natural Resources of Kazakhstan considered culling of 80,000 Saigas, but later withdrew this suggestion after protests from animal welfare activists, demands from conservationists and scientists for a more thorough analysis and finally due to an order from the president’s office.

Climate change is happening much faster than scientists predicted less than a decade ago, according to the latest report from a United Nations climate panel. Global warming has already resulted in higher incidences of extreme weather events, intense glacier melting and more frequent avalanches, floods, landslides and mudflows in Central Asian mountains.

On 20-22 September 2022, Government representatives and experts from Persian Leopard Range States came together for the first Persian Leopard Range States Meeting held in Tbilisi, Georgia. The Meeting was convened by the CMS Secretariat with logistical support from the Caucasus Nature Fund and with funding from the Federal Ministry for the Environment, Nature Conservation, Nuclear Safety and Consumer Protection of Germany (BMUB) through Germany’s Federal Agency for Nature Protection (BfN).

Wildlife trafficking is estimated to be a multi-billion-dollar business involving the unlawful harvest and trade of animals and plants. Saiga Antelopes (Saiga spp.) are critically endangered according to the IUCN Red List assessment of 2018. As shown in the Overview Report, presented at the fourth Meeting of Signatories to the Saiga MOU in September 2021, almost all Saiga populations have grown in recent years. 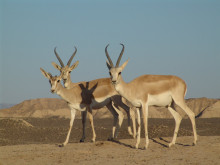 Central Asia holds some of the world’s largest intact grassland ecosystems as well as mountain areas. To help preserve them and facilitate their delivery of long-term environmental and social benefits, SOS Central Asia granting mechanism was set up by IUCN Save Our Species and IUCN ECARO to support the implementation of the CMS’ Central Asian Mammals Initiative, focusing on Goitered Gazelles and Snow Leopards.