Aquatic Warbler: experts meet to discuss the next steps for its long-term protection 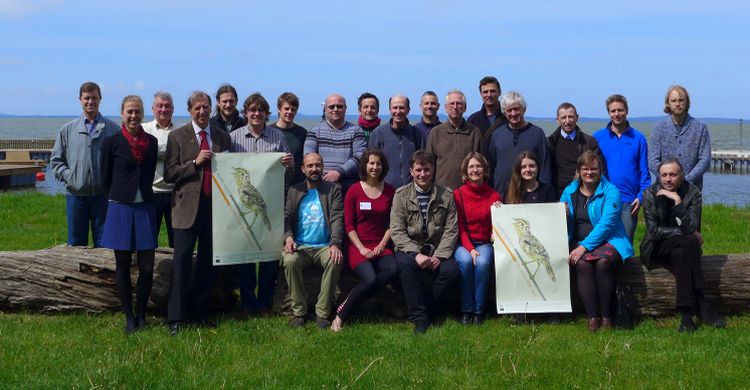 Bonn, 28 May 2015- On 20-21 May 2015, representatives of the Signatory States to the Memorandum of Understanding concerning Conservation Measures for the Aquatic Warbler (Acrocephalus paludicola) together with NGOs and experts met in the Nemunas Delta Regional Park (Venté, Lithuania), to assess the conservation status of the species and give new orientation to its conservation for the coming years.  In this sense, not only has the Action Plan been updated to reflect the latest available information relative to the species, but also the Meeting of Signatories (MOS) has made recommendations for actions to be undertaken up to the next Meeting of Signatories.

The meeting was co-organized by the CMS Secretariat and the Lithuanian organization “Baltic Environmental Forum” under the framework of the EU LIFE+ project “Securing sustainable farming to ensure conservation of globally threatened bird species in agrarian landscapes”  The MOS took place back to back with the international seminar “Achievements, Success Stories and Lessons Learned of the Aquatic Warbler Conservation” (on 19-20 May 2015) that was the stock-taking and final meeting for this EU LIFE+ project. The BirdLife International Aquatic Warbler Conservation Team also had the opportunity to meet twice during this period.

After a thorough and intense discussion between experts and government representatives, the MOS recommended some priority actions to be undertaken by 2020. The first recommendation concentrates on the conservation of the core breeding population of Aquatic Warblers in eastern Poland, Belarus and Ukraine, the countries that hold more than 95% of the global population. For that purpose, large-scale habitat management is required. That implies permanent financial support and the sustainable economic use of biomass obtained after mowing, following approaches developed and successfully implemented within the framework of EU LIFE projects in Poland and Lithuania. These schemes should now be widened to Ukraine and Belarus.

A second major recommendation concerns the Pomeranian population of Aquatic Warbler between Germany and Poland. Despite several conservation projects over the last few years, this population has declined to only 13 singing males in 2014 and is now critically endangered. In order to avoid its disappearance, the MOS proposes to undertake a feasibility study for an Aquatic Warbler reintroduction project by means of translocation of birds from eastern Poland into restored habitats in Germany. The position of a joint Polish-German Aquatic Warbler conservation officer should be created to ensure the coordination and the implementation of this project.

Furthermore, the role of the Brittany region in France as a major stop-over area for the Aquatic Warbler during migration has been pointed out. France is therefore being encouraged to establish a long-term monitoring scheme to produce an annual productivity index for the global population, by developing a system of permanent ringing stations – which could later also include ringing stations from other Range States such as the Netherlands, Belgium, Spain and Portugal.

Finally the MOS agreed that the gap of information from the African Range States needs to be filled. More knowledge is urgently needed to assess the current importance and threat status of Aquatic Warbler moulting and wintering sites in Africa. Despite unstable political conditions in some Range States, the meeting sent a strong appeal to signatories to support ground research in Africa. It was also recommended to support the African Eurasian Migratory Landbirds Action Plan (AEMLAP) and the associated working group to develop and support conservation projects in the wintering areas in West Africa.

The MOS also highlighted and acknowledged the work accomplished by the Aquatic Warbler Conservation Team, an informal group of scientists and conservationists working on the Aquatic Warbler, coming from all States in the bird’s breeding range and some stopover countries. This very engaged expert team promotes the implementation of conservation projects and is a great support to the MOU.

The MOS closed its Third Meeting reiterating the aim to reach the conservation targets for the Aquatic Warbler in 2020 and reassuring the commitment of Signatory States to the protection of this very rare bird.